By Matt BrooksPublished On: November 2, 2022Categories: Arrests, Featured, In the Polls

A new poll reveals that only one in four Republicans recognize that people of color are unfairly punished by the enforcement of cannabis criminalization compared to white people.

The findings of the survey, carried out by Data for Progress, come in spite of multiple studies of police data that show people of color are more likely to be arrested for marijuana-related offenses than white people.

Racial disparities in marijuana criminal enforcement is often used as a reason to support cannabis legalization efforts, but it is a message that seemingly doesn’t resonate with large swathes of Republican voters.

Democrats and Independents are far more likely to recognize racial disparities in the enforcement of marijuana prohibition but, at 77 percent and 57 percent respectively, some would argue there is still a sizable gap between perception and reality.

In total, a slim majority of 52 percent of Americans surveyed agree, either strongly or somewhat, that “people of color are unfairly punished for possession of marijuana compared to white people.”

Twenty-four percent of voters who identify as Republican agreed with this statement, of which only 11 percent strongly agreed. 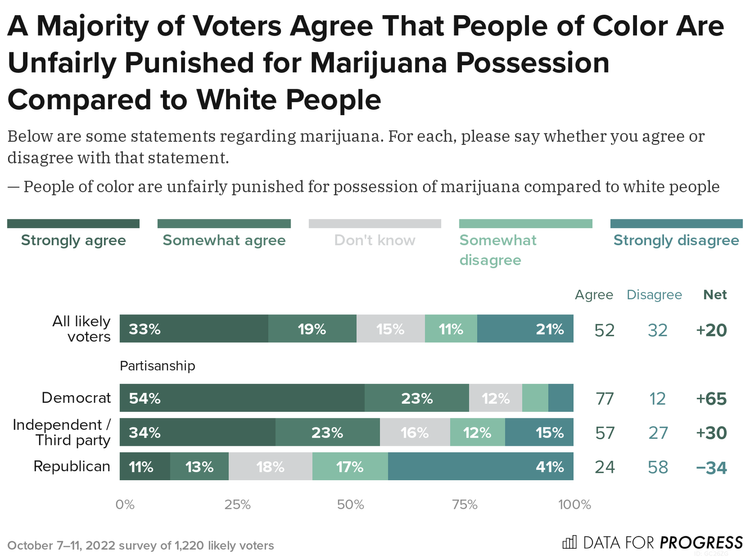 “With only half of Americans acknowledging the reality that criminalization is enforced in a racially disparate way, clearly more work is needed by advocates and elected leaders to educate the public,” said Justin Strekal, founder of the BOWL PAC. “Given the partisan divide, now is the time for Republican leaders to speak up or be defeated by someone who will.”

Two years ago, the American Civil Liberties Union (ACLU) published a landmark report showing that Black people are four times more likely to be arrested for possessing cannabis than white people, even though consumption rates are much the same.

It is also now widely-established that cannabis prohibition, and the war on drugs more generally, largely served as a pretext for the Nixon administration to advance its political agenda by associating opponents and enemies with drugs and facilitating their incarceration. So much so that in a video, officials at the Drug Enforcement Administration (DEA) recently acknowledged that “racial, ethnic and class prejudice” were partly responsible for the agency’s establishment.

The Data for Progress poll was conducted from October 7 to 11 and included interviews with 1,220 likely voters.