Recreational use is illegal in Missouri, but the state has a medical marijuna program in place. Register patients may possess a 60-day supply of dried cannabis not to exceed eight ounces; while possession by the general public is a misdemeanour punishable by a $500 fine. Missouri permits patients to cultivate six flowering plants, six nonflowering plants, and six clones after meeting requirements set by the Department of Health and Senior Services. 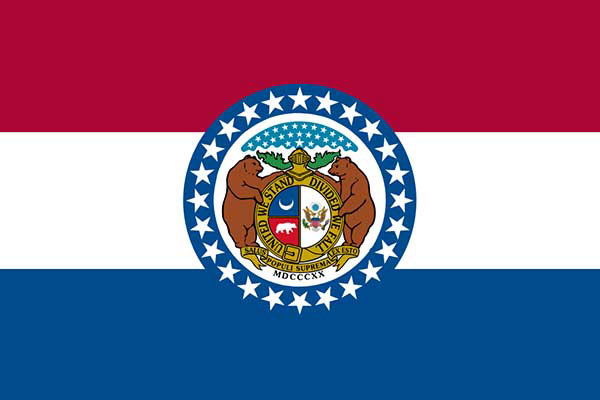 Marijuana is permitted in Missouri only for limited, non-intoxicating medical uses. It is a crime to possess, sell, distribute, traffic, or cultivate the drug for any other reason.

Simple possession of up to 10 grams, on a first offense, is a misdemeanor punishable by nothing more than a $500 fine. Subsequent offenses are punishable by up to a year in jail and $2,000 in fines.

The penalty for possessing between 10 and 35 grams is a year in jail and a $2,000 fine. It is a felony to possess between 35 grams and 30 kilograms of marijuana, and the maximum penalty is 7 years in prison and $10,000 in fines. Possession of this quantity has historically been considered as intent to distribute.

Selling to a minor, likewise a felony, comes with a mandatory minimum of 3 years, and a maximum penalty of 15 years plus two times the profit made in fines. There are special penalties for distributing marijuana near a school, recreational park or public housing. In these cases, the prison term is between 10 and 30 years, with the fine again determined by the profit made.

For bringing quantities of between 30 and 100 kilograms into the state, the penalty is between 3 and 10 years in prison and $10,000 in fines. When more than 100 kilograms or 500 plants are involved, the potential prison term is between 5 and 15 years, and the fine is twice as much as the profit made.

Distribution or manufacture of between 30 and 100 kilograms is punishable by between 5 and 15 years in prison. The potential prison term increases to between 10 and 30 years when the quantity involved exceeds 100 kilograms. Payable fines are twice as much as the profit made.

There are no special laws regarding possession, sale, distribution, manufacture, or trafficking of hashish or other marijuana concentrates. They are treated the same as dried cannabis flower, with similar weight limits and penalties.

Marijuana paraphernalia is illegal in Missouri unless intended, marketed, and designed strictly for legal use. It is illegal to use, or possess with intent to use, any item that can be used in the production, cultivation, harvesting, processing, testing, analysis, storage, or consumption of marijuana.

On a first offense, possession of paraphernalia is a misdemeanor punishable by no more than a $500 fine. On a second offense, a jail term of 1 year is possible, as well as fines of $2,000.

Missouri voters legalized medical marijuana at the ballot in November 2018. The new law makes it legal for patients to possess and use marijuana for a long list of conditions.  The program is not yet operational.

PATIENT POSSESSION LIMITS:
Patients are permitted to purchase up to 4 ounces per 30 days. The Department of Health could place limits on the quantity of marijuana possessed, “provided that the limit is not less than a 60 days supply.”

HOME CULTIVATION:
Yes, patients are allowed to cultivate up to 6 flowering plants at any one time, as long as they are in a “closed, locked facility.” Qualifying patients must obtain an ID card from the Department of Health.

CAREGIVERS:
Yes, a primary caregiver must be at least 21 years of age and registered with the Department of Health. A caregiver may serve a maximum of three patients.

The following Missouri lawyers are actively involved in the practice of cannabis law: