Though recreational use remains illegal in New Hampshire, possession of 21 grams of cannabis or up to 5 grams of hash is decriminalized. The Therapeutic Cannabis Program allows residents 18 and older who suffer from a qualifying condition to register as a patient. Patients are limited to purchasing no more than two ounces of marijuana within a 10-day period from a licensed dispensary. 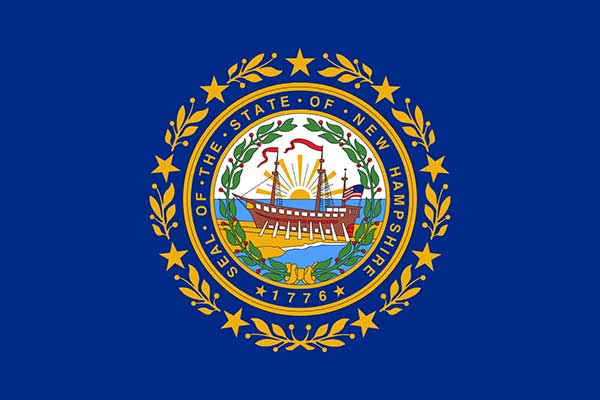 Cannabis is allowed for medical use in New Hampshire, and possession of small amounts for recreational personal use has been decriminalized, but it is a crime to possess more than the specified limits.

Possession of more than three-quarters of an ounce in a misdemeanor punishable by up to a year in jail and $350 in fines. Minors convicted of any cannabis offense, including simple possession, are subject to suspension of their driver’s licenses.

Sale and Possession with Intent

It is a felony in New Hampshire to sell any amount of marijuana or to possess it with intent to sell or distribute it. If the amount is 1 ounce or less, the maximum sentence on a first offense is 3 years in prison and $25,000 in fines. On a subsequent offense, the penalty is up to 6 years imprisonment and a maximum fine of $50,000

If the weight is between 1 ounce and 5 pounds, the top penalty is 7 years in prison and a $100,000 fine on a first offense. On a subsequent offense, there is a maximum sentence of 15 years imprisonment and a maximum fine of $200,000.

If the amount is greater than 5 pounds, penalties include a maximum of 20 years in prison and a $300,000 fine on a first offense. A subsequent offense is punishable by a maximum sentence of 40 years imprisonment and a maximum fine of $500,000.

Offenses that take place within 1000 feet of a school zone are subject to double the fines.

Growing cannabis is also a crime in Hampshire. Cultivation is treated as a possession offense, with the same weight limits and penalties.

Possessing more than 5 grams is punishable by up to $350 in fines and a year in jail.

It is a felony to manufacture concentrates, sell them, or possess them with intent to sell. Where the weight is five grams or less, the top punishment is 3 years in prison and $25,000 in fines.

The maximum for between 5 grams and 1 pound is 7 years and $100,000. And the penalty for manufacturing, selling, or possessing concentrates with intent to sell more than 1 pound cannot exceed 20 years in prison and a top fine of $300,000.

Paraphernalia, including any items used in the cultivation, harvesting, analysis, testing, storage or use of marijuana, is also banned under New Hampshire law. Sale or possession of any drug paraphernalia is a misdemeanor punishable by up to 1 year in jail and $2,000 in fines, unless the items are marketed, sold, and used only for legal purposes.

New Hampshire allows the therapeutic use of cannabis to treat a list of qualifying conditions.

STATE-LICENSED DISPENSARIES:
Yes. The number of licensed dispensaries was initially capped at four, although legislation removed this limit in certain counties.

The following New Hampshire lawyers are actively involved in the practice of cannabis law: