Both medical marijuana and recreational adult-use are permitted in Illinois. The general public may possess up to 30 grams of flower and 5 grams of cannabis concentrates. Registered patients may cultivate up to 5 plants at home and purchase up to 2.5 ounces from dispensaries every 14 days. 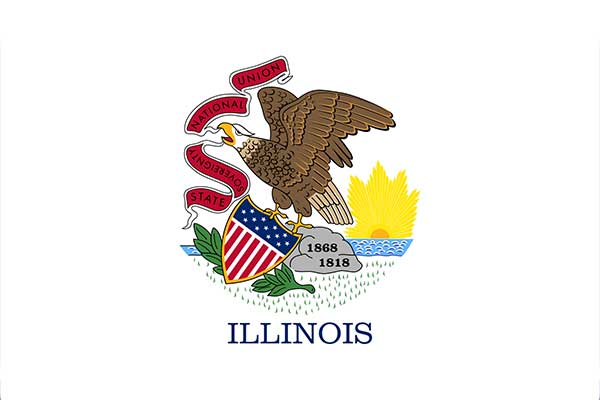 Illinois’ legalization measure means that Illinois residents are permitted to possess up to 30 grams of marijuana. Non-residents are legally allowed to carry up to 15 grams.

Possessing between 30 and 100 grams is a misdemeanor on a first offense, as is punishable by up to a year imprisonment and a $2,500 fine.

Selling more than 10 grams is a felony. If the quantity sold is between 10 and 30 grams, the punishment is between 1 and 3 years in prison, and the offender faces potential fines of $25,000.

If the delivery takes place on school grounds, increased penalties apply. Bringing 2,500 grams of cannabis into the state of Illinois is considered trafficking and carries a minimum sentence of twice the sentence for sale of marijuana.

Cultivating marijuana in Illinois is not permitted unless the grower is enrolled in the state’s medical marijuana program. Registered patients are allowed to grow up to 5 plants at any one time.

For non-patients, growing up to 5 plants is a civil violation punishable by a fine of up to $200. If the number of plants involved is more than 5, the offense is a felony. Growing between 5 and 20 plants is punishable by 1 to 3 years imprisonment and fines of up to $25,000. For 20 to 50 plants, the potential prison term increases to between 2 and 5 years. Cultivating between 50 and 200 plants is punishable by between 3 and 7 years in prison and fines of $100,000. For cultivating more than 200 plants, the potential prison term is 4 to 15 years and the maximum possible fine is $100,000.

Adults are permitted to possess up to 5 grams of cannabis concentrates in Illinois. For non-residents, the legal limit is 2.5 grams. Penalties of possessing larger amounts are the same as for marijuana flower.

It is a misdemeanor to possess paraphernalia with more than 10 grams of marijuana. The penalty is up to 1 year in jail and $2,500 in fines.

However, it should be noted that since marijuana was legalized on January 1 2020, the language specifically relating to marijuana paraphernalia has been removed from the paraphernalia legislation. This could be interpreted that paraphernalia meant to legally be used with recreational marijuana could be considered legal. It’s recommended that you consult with a local lawyer for the specifics of this law.

Illinois’ medical marijuana legislation was signed into law in 2013, allowing qualifying patients to legally possess and obtain cannabis for medical use. The “Compassionate Use of Medical Cannabis Pilot Program Act” protects registered patients from “arrest, prosecution, or denial or any right or privilege.”

Physicians are no longer required to explicitly recommend cannabis therapy, but instead must simply certify that a doctor-patient relationship exists and that the patient has a qualifying, debilitating medical condition.

PATIENT POSSESSION LIMITS:
Two and a half ounces of marijuana in a 14-day period

HOME CULTIVATION:
Registered patients may cultivate up to five plants at any one time.

CAREGIVERS:
Yes. Caregivers, who may only serve one qualifying patient at a time, are allowed to pick up medicine for ill, homebound patients, and are subject to the same possession limits.

The following Illinois lawyers are actively involved in the practice of cannabis law: