Cannabis use and possession for any purpose is illegal in Nebraska. Possessing one ounce or less is an infraction resulting in fines of up to $300 and court-ordered drug abuse treatment. With most residents in support of medical marijuana, lawmakers have worked for years to pass legislation. 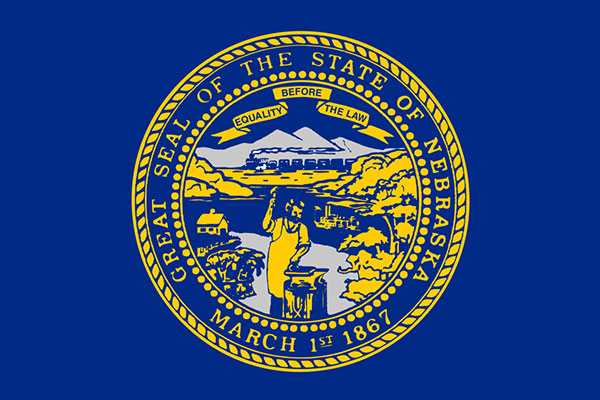 Possession of small amounts of marijuana is decriminalized in Nebraska, but any other possession, sale, or cultivation is illegal. Hash and concentrates are also banned, as is drug paraphernalia. Penalties can be severe, especially for concentrates.

Possession of less than 1 ounce is a minor civil infraction on a first offense and carries a maximum penalty of $300. There is no jail time. A second offense is a misdemeanor that comes with up to 5 days in jail and fines of up to $500. On a third offense, the penalty increases to as many as 7 days in jail and $500.

Possessing between 1 ounce and 1 pound is also a misdemeanor, with a top penalty of 3 months in jail and $500 in fines. Possessing any amount greater than 1 pound is a felony, and the maximum penalty is 5 years in prison and a $10,000 fine.

Cultivation of marijuana is also treated as a possession crime, with the same weight limits and penalties.

Sale of any amount of marijuana is a felony in Nebraska, carrying between 1 year in jail and as many as 20 years in prison, plus a possible $25,000 fine. Sale of cannabis to a minor, or within 1,000 feet of a school or another prohibited zone, is punishable by at least 1 year in prison and as many as 50 years in prison. Any subsequent offenses are subject to a mandatory minimum sentence of 3 years, up to a maximum of life in prison.

Nebraska law bans drug paraphernalia but treats first-time possession of it as a civil infraction rather than a crime. Paraphernalia in the state includes any items intended for use with the cultivation, harvesting, cultivation, testing, analysis, storage, or use of marijuana.

Possession and use. Possession of paraphernalia is a civil infraction on a first offense and carries a fine of up to $100. On a subsequent offense, the fine is between $200 and $500.

Sale to a minor. Selling marijuana to a minor is a misdemeanor when the seller is at least 3 years older than the recipient. The maximum punishment is up to a year in jail, $1,000 in fines, or both.

Nebraska has not yet legalized the medicinal use of marijuana.

The only legal products are hemp-derived CBD oils containing no more than 0.3% THC and approved by the Nebraska Department of Agriculture.

QUALIFYING CONDITIONS:
Anorexia, Arthritis, Cachexia, Cancer, Chronic Pain, HIV/AIDS, Glaucoma, Migraine, Persistent Muscle Spasms, Severe Nausea, Seizures, and any other debilitating illness where the medicinal use of marijuana was been “deemed appropriate and has been recommended by a physician.”

The following Nebraska lawyers are actively involved in the practice of cannabis law: