Medical and recreational marijuana use is illegal in North Carolina. The state allows patients with intractable epilepsy to possess and consume CBD oil that contains less than 0.9% THC, though no regulated retail locations are operational. 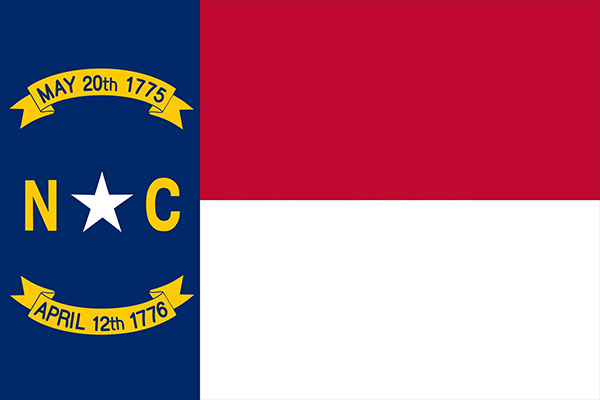 North Carolina has partially decriminalized simple marijuana possession, and the drug is legal for limited, non-intoxicating medical uses. But any other possession, sale, delivery, or cultivation of the drug is a crime.

Possession of half an ounce of marijuana or less is a misdemeanor in North Carolina but does not carry potential jail time. At most a $200 fine may be imposed.

With Intent to Distribute

Any sale or delivery of cannabis is a felony in North Carolina. For amounts less than 10 pounds, the punishment is at least 4 months in jail and as many as 8, plus $1,000 in fines.

Selling or delivering marijuana to a minor or a pregnant woman is punishable by between 3 and 8 years in prison. Sale or delivery within 1,000 feet of a school, child care center, or public park carries a minimum penalty of 1 year in jail and a maximum of 3 years in prison.

It is a felony to grow any amount of cannabis in North Carolina for any reason. Penalties for growing less than 10 pounds range between 3 and 8 months in jail, along with up to $1,000 in fines.

Special rules apply to offenses involving hashish or other marijuana concentrates. Possession of less than 0.05 ounces is a misdemeanor and comes with a punishment of at least 1 day in jail and as many as 10 days, plus a $200 fine.

Possession of between 0.05 and 0.15 ounces of concentrate is also a misdemeanor and is punishable by at least one day in jail, as many as 45 days, and $200. Possession of more than 0.15 ounces is a felony with a minimum term of 4 months in jail, a maximum of 6 months, and a potential fine of $200.

Marijuana paraphernalia is illegal in North Carolina unless intended, marketed, and used solely for legal purposes. Paraphernalia includes any items used, or intended for use, in the manufacture, cultivation, harvesting, processing, testing, analysis or consumption of marijuana.

Possession, sale, delivery or manufacture of marijuana paraphernalia are misdemeanors punishable by between 1 and 45 days in jail and up to $1,000 in fines. If the paraphernalia is sold to a minor who is at least 3 years younger than the seller, the jail term is between 3 and 8 months.

Any marijuana crime involving a minor is a felony and is punishable by at least 8 months in jail and as many as 7 years in prison. Possession of cannabis in a penal institution is a felony with a penalty of between 4 and 8 months additional imprisonment.

North Carolina’s CBD-only legislation calls for a trial study to be conducted by four universities in the state: UNC, Duke, Wake Forest and East Carolina.

The primary focus is to make CBD oil available to minors that suffer from seizures.

The following North Carolina lawyers are actively involved in the practice of cannabis law: