Both medical marijuana and adult-use are illegal in Indiana, though use of CBD oil containing less than .3% THC is permitted. Possession of less than 30 grams of marijuana or less than 5 grams of concentrates is a misdemeanor with up to 1 year of imprisonment and a $5,000 fine. 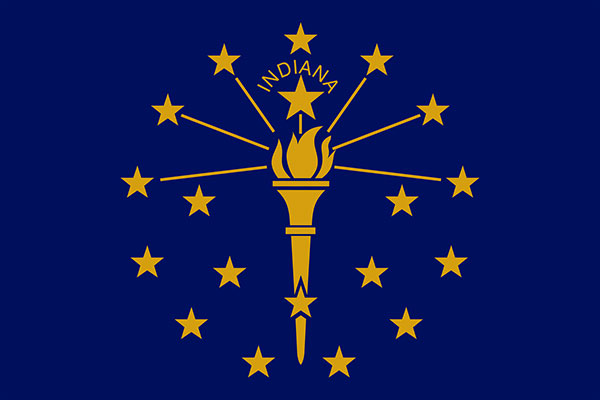 If you are a resident of The Hoosier State, you should be aware that this state has harsh penalties when it comes to marijuana laws. The only legal forms of marijuana are CBD products with less than 0.3% THC.

Simple possession of any amount of marijuana up to 30 grams (roughly one ounce) is considered a misdemeanor in Indiana and can be punished by as much as 180 days in jail and a $1,000 fine on a first offense. Penalties for subsequent offenses are up to 1 year in jail and $5,000 in fines.

Possession of any amount greater than 30 grams is a felony punishable by at least 6 months in jail and as many as 2.5 years in prison, plus a $10,000 fine.

Indiana has a conditional discharge program for first-time offenders, especially people charged with misdemeanors, but cannabis is in no way decriminalized there.

Any sale, cultivation, or manufacture of cannabis or cannabis products is a crime. If the weight is 30 grams or less, the maximum penalty is 1 year in jail and $5,000 in fines. If the amount is between 30 grams and 10 pounds, the minimum sentence is 6 months in jail while the maximum is 2.5 years in prison; there is also a potential $10,000 fine.

Hashish and other cannabis concentrates are treated more severely than regular marijuana under Indiana law. Possession of more than 5 grams is a felony punishable by 6 months – 2.5 years in prison, as well as potential fines of $10,000.

Manufacture is likewise illegal. If less than 5 grams are involved, the charge is a misdemeanor, which comes with up to a year in jail and $5,000 in fines. Manufacture of between 5 and 300 grams is a felony, punishable by between 6 months and 2.5 years in prison, and $10,000 in potential fines. When the amount involved exceeds 300 grams, the minimum term of imprisonment is 1 year, the maximum is 6 years, and fines of up to $10,000 are possible.

Paraphernalia is the only aspect of cannabis law that has been decriminalized in Indiana. Paraphernalia includes any items intended for use in the cultivation, harvesting, processing, testing, analysis, storage or use of marijuana.

Use and possession. Possession of paraphernalia is a civil infraction and carries no jail time, though it does carry a potentially massive fine of up to $10,000. A subsequent conviction is punishable by between 6 months in jail and 2.5 years in prison, as well as a possible $10,000 fine.

Sale and distribution. Selling paraphernalia is a class A infraction punishable by a fine of up to $10,000. A person dealing in paraphernalia with a prior unrelated judgement or conviction can be punished by between 6 months and 2.5 years’ imprisonment, plus a maximum $10,000 fine.

Manufacture. Manufacture of paraphernalia is likewise a class A infraction, punishable by a fine of up to $10,000. Subsequent offenses are level 6 felonies, and the max penalty is $10,000 in fines and between 6 months and 2.5 years imprisonment.

Indiana has passed a medical CBD law allowing the use of cannabis extracts high in CBD and low in THC, when recommended by a physician for a state-qualifying condition.

STATE-LICENSED DISPENSARIES:
No. However, retailers are authorized to sell “low-THC hemp products” that are lab-certified to contain no more than 0.3 percent THC, subject to labelling and packaging requirements.

The following Indiana lawyers are actively involved in the practice of cannabis law: