As any capitalist can tell you, the market finds a way. Washington, D.C., has a marijuana law that allows for private consumption but not private sales. So some entrepreneurs have created “pop-up shops.” At parties in private residences, gift items are sold (for example, stickers, bracelets, or sports cards), and along with those legal sales, marijuana is given as a gift.

The nation’s capital city, Washington, D.C., is in a unique legal situation. Since it isn’t a state, it has no senators, although it has more residents than Vermont and Wyoming. It also has no representative in Congress, although it does have one delegate who has limited voting privileges. Under the District of Columbia Home Rule Act of 1973, the city has a council, but any laws passed by the council must be approved by the U.S. Congress. Congress, in turn, is controlled by Republicans, which makes greater legalization very unlikely for now. 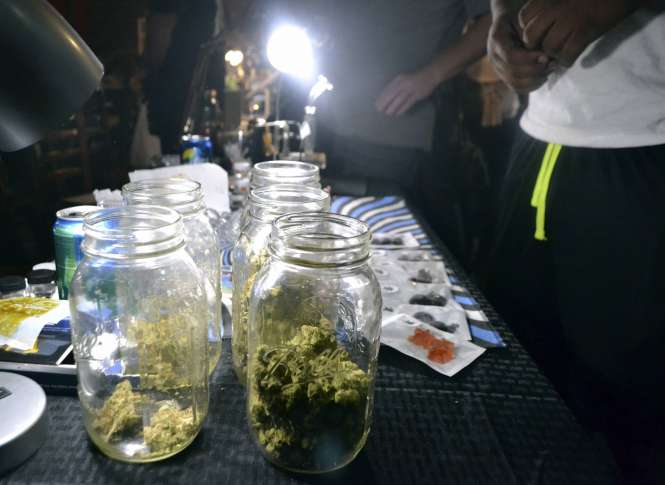 Jars of marijuana available as gifts at one of DC’s private parties.

In 2014, the city’s voters passed Initiative 71, the Legalization of Possession of Minimal Amounts of Marijuana for Personal Use Act of 2014. Despite Republican opposition in Congress, which included threats of prison for the city’s mayor, I-71 became law. (This happened by default after Congress missed a budget deadline.) I-71 allows for adult possession and use of two ounces or less of marijuana. In addition, it is legal to grow six plants (three flowering). Thanks in no small part to federal stonewalling, the initiative does not have a system of regulation or taxation. Under I-71, it is still illegal to sell cannabis in Washington, D.C., but not to give up to an ounce as a gift to an adult.

The result is pop-up parties. They are advertised on social media such as Instagram, and even Eventbrite. They appear and disappear quickly, so that the police have trouble shutting them down, and are held at private residences. They thus comply with the letter of the law. Under case law, police must be able to point to a “specific and articulable” fact—beyond smell—before they may conduct a search for marijuana. If people are not seen smoking outside, police lack probable cause to search a private home. They thus have directed their efforts to finding cause to stop the cars of vendors.

Pop-up markets are responsive to consumer demands. In addition to bud, they offer tinctures, edibles, and concentrates. Buyers number in the hundreds, and parties occur nightly. Unlike boozy parties, violence is very rare. Buyers find the parties by searching online for “I-71 compliant,” “Nothing for sale,” or “gift parties.” Buyers then send private messages to those posting these announcements and receive notice of the address. There are also accounts of reviewers, thus giving consumers a measure of safety against deceptive advertisers. In short, the market is finding a way to put sellers and buyers together with as much safety as the law allows.

What do you think: What will happen to pop-up parties? Will Congress turn blue in 2019? Leave a comment below.