Medical marijuana has gone kosher. A company based in Albany, N.Y., says it plans to offer the world’s first kosher marijuana for medical use. 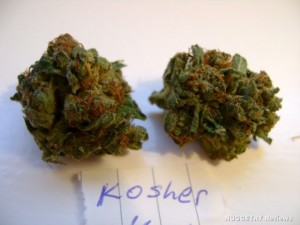 Vireo Health of New York obtained certification in December from the Orthodox Union, a group that oversees kosher rules in the United States. Its certification marks the first time marijuana has been officially labeled kosher.

Vireo is one of five providers licensed under the state’s new medical marijuana program. The first legal medical cannabis will become available in New York this month, and only Vireo will offer kosher product.

“Being certified kosher by the OU will not only help us serve the dietary needs of the largest Jewish community in the United States, but also combat unfortunate stigmas associated with medical cannabis,” CEO Ari Hoffnung said in a press release. “Today’s announcement sends an important message to New Yorkers of all faiths and backgrounds that using medical cannabis to alleviate pain and suffering does not in any way represent an embrace of ‘pot’ culture.”

Kosher marijuana is for medical use only

Indeed, the certification only applies to medical use. Though many Jews smoke marijuana, the drug is prohibited for recreational use under strict interpretations of Jewish religious law.

Judaism proscribes a complex set of rules regarding behavior, diet, and alcohol consumption, among other issues. The religion’s three main sects observe the rules to varying degrees, with Orthodox Jews the most observant and Reform Jews typically the least.

Intoxication is discouraged outside of specific holidays and settings, and cannabis has traditionally been banned. But Judaism makes explicit exceptions to many of its rules when a person’s health is at stake. Diabetics are excluded from fasting requirements, and people who need marijuana are allowed to use it.

Vireo’s kosher products “were developed to alleviate pain and suffering in accordance with the New York State Compassionate Care Act,” said Rabbi Menachem Genack, head of the kashrut department of the Orthodox Union. “Using medical cannabis products recommended by a physician should not be regarded as a ‘chet,’ a sinful act, but rather as a mitzvah, an imperative, a commandment.”

Dispensaries will open across the state in January. Vireo is already growing marijuana in Upstate New York, in the town of Perth, and the company plans to open four retail shops, including two in or near New York City.

The state’s medical marijuana program is one of the nation’s most restrictive. Only certain hospitals are allowed to provide patient recommendations, and users are not allowed to smoke the drug. Instead they must vaporize it, eat it, or drink it.