Police in Alaska have raided a cannabis club owned by a former journalist who famously quit her job on live TV to pursue her real passion: marijuana. 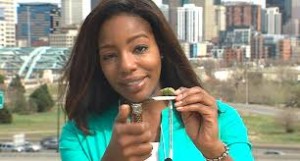 Police didn’t immediately elaborate on what they found, but Greene said they took a few plants and some scattered cannabis paraphernalia, but nothing of great value to the club.

“I saw them uproot a couple of marijuana plants,” said Greene, whose real name is Charlene Egbe. “They took some bongs and pipes and phones and computers, and that’s pretty much it.”

Cannabis is legal for any use in Alaska, following a legalization vote last November. Adults over 21 are allowed to possess up to an ounce of marijuana and grow up to six plants, with no more than three flowering at any one time.

But the state hasn’t yet adopted the regulations that will govern a commercial cannabis industry. Retail marijuana stores won’t open until 2016, and for now Alaskans are only allowed to grow it at home and gift small amounts to other adults.

Police said they were responding to reports of marijuana trades at the Anchorage club. State officials are still working to draft regulations governing cannabis clubs and other details of legal marijuana, but police said such clubs are banned in the meantime.

“It’s very important that people don’t try to jump the gun until the state sets out other rules and protocols for the sale and commercialization of marijuana,” said Anchorage Police Department spokeswoman Jennifer Castro.

No charges have been filed

No one was arrested during the raid and no charges have been filed. Greene told a local TV outlet that the club only serves medical patients, who share marijuana with each other.

Greene was an on-air reporter at KTVA of Anchorage last September when she stunned viewers by announcing her ties to medical marijuana and declaring, “fuck it, I quit” on live TV. She walked off camera and resigned.

Her decision came during a broadcast about patient access to medical cannabis, which has been legal in Alaska since the late 1990s.

“Everything you’ve heard is why I – the actual owner of the Alaska Cannabis Club – will be dedicating all of my energy for fighting for freedom and fairness, which begins with legalizing marijuana here in Alaska,” Greene said at the time. “And as for this job, well, not that I have a choice but . . . Fuck it, I quit.”