Virginia Marijuana Arrests At The Highest In A Decade

In Virginia, marijuana remains illegal, although support for decriminalization is very high. Nevertheless, arrests for possession of small amounts have been increasing since 2016. Perhaps because of legalization in Washington, DC, and elsewhere, Virginians may be making the mistake of thinking that possession of small amounts or public use will not get them arrested, making it easier for police to catch them.

Possession of less than half an ounce is a misdemeanor, for which the maximum penalty is thirty days in jail and a fine of $500. Possession of more than half an ounce is a felony. The state also has civil asset forfeiture laws. According to a poll conducted by the Judy Ford Wason Center for Public Policy, among Virginians “[s]upport for decriminalizing the possession of small amounts of marijuana stands at 76% overall and crosses all demographic and partisan categories, dropping to its lowest level (60%) among self-identified Republicans.” Regarding this disparity, the executive director of Virginia NORML had this to say: “This drastic increase in arrests is completely out of step with public opinion. Law enforcement resources would be better directed towards preventing and solving violent crimes with the passage of a decriminalization bill.” 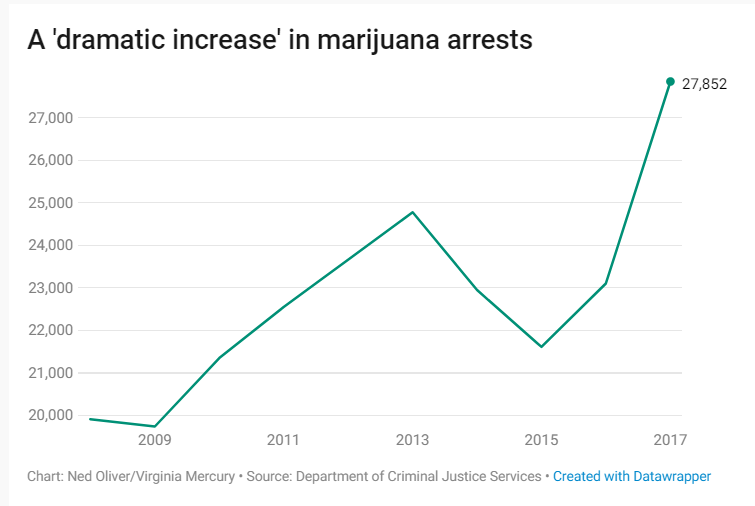 Virginia’s legislature failed to pass such a bill this year. In 2013, the son of Kirk Cox, a Republican who is the majority leader of the House of Delegates, was charged with misdemeanor possession after a traffic stop. According to one report, a “spokesman for the Virginia Republican Party said in a statement ‘this is a personal issue that Delegate Cox and his family will work through together.’” A search of Delegate Cox’s web page, kirkcox.com, revealed nothing regarding marijuana. The Virginia State Senate is led by Thomas K. Norment, Jr., and a search of his web site reveals only that he voted in favor of a bill that added to the list of chemical combinations identified as synthetic marijuana. Norment did, however, introduce a decriminalization bill in 2018. SB 954 sought to reduce “penalties for possession to a fine of not more than $500.” This bill did not become law. 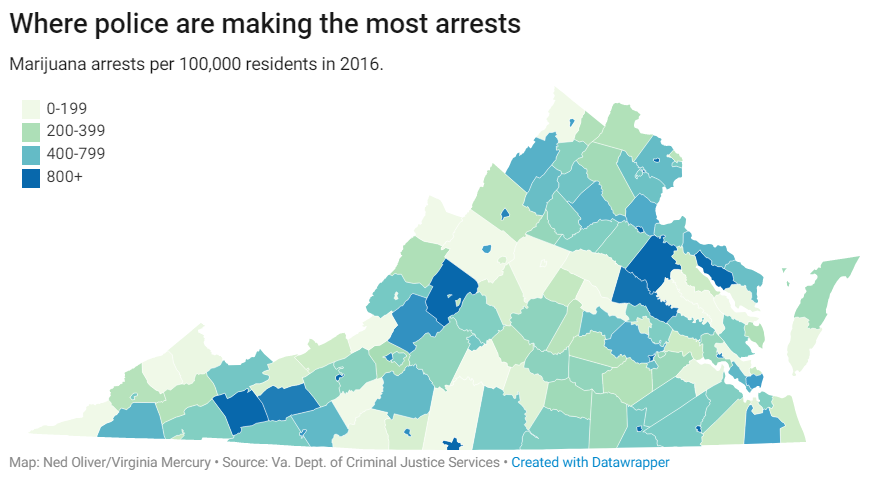 Virginia’s governor is Ralph Northam, a Democrat. He has campaigned on decriminalization. In one interview, he lamented not being able to obtain passage of SB 954, saying: “There are a lot of lives that are ruined by making mistakes and being put in jail. That’s something that I ran on in 2017, and there were actually some folks on both sides of the aisle that were discussing it, but it didn’t happen.” On Twitter, Northam has promised to “revisit” the issue. He also supports rescheduling marijuana on the federal level, so that it may be studied for its possible medical uses, and he has signed a bill giving doctors greater discretion in recommending CBD.

On the issue of the medical uses of cannabis, Northam has written: “As a doctor, I’m becoming increasingly convinced by the data showing potential health benefits of marijuana, such as pain relief, drug-resistant epilepsy, and treatment for PTSD. By decriminalizing it, our researchers can better study the plant so doctors can more effectively prescribe drugs made from it.”

He has also raised the issue of disparate enforcement, which has continued with the recent increase in arrests. On this issue, Northam has written: “We need to change sentencing laws that disproportionately hurt people of color. One of the best ways to do this is to decriminalize marijuana. African Americans are 2.8 times more likely to be arrested for marijuana possession in Virginia.”

See also: In Alabama, Blacks Are Four Times More Likely Than Whites To Be Arrested

As arrests for possession and public use climb in Virginia, even as public opinion favors decriminalization, the legislature’s failure to pass a decriminalization bill seems likely to gain increased attention from voters.

What do you think? When will Virginia manage to pass a decriminalization bill? Leave a comment below.