According to the poll, almost every group except Republicans favors legalization. (Interestingly, a more recent Gallup poll shows that for the first time, a slim majority of 51 percent of Republicans now favor legalization.) Among voters over 65, 50 percent are opposed and 41 percent in favor. Hispanic voters are even at 48 percent pro and con.

The poll also asked voters about whether the federal government should enforce its marijuana laws in states where marijuana or medical marijuana is legal. On this issue, the poll again showed clear results, with 70 percent favoring a hands-off federal policy and only 23 percent favoring federal enforcement. No group (such as Republicans or people over 65) had a majority in favor of federal enforcement in legal states. U.S. Attorney General Jeff Sessions, who has vocally opposed a federal hands-off policy, did not fare well in the poll, with 47 percent having an unfavorable opinion of him and only 14 percent viewing him favorably. 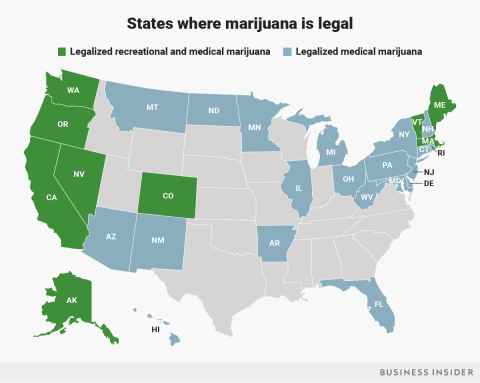 Politicians coming round to marijuana

It should not be surprising, therefore, that some federal politicians are beginning to change their stance toward marijuana. U.S. Senators Elizabeth Warren (a Democrat) and Cory Gardner (a Republican) have recently announced that they plan to sponsor a bill that would grant states the right to set their own marijuana laws, effectively putting the Obama-era hands-off policy into law. As a states’ rights measure, the bill may appeal to Republicans, but the senators expressed the awareness that the bill would face resistance from members of both parties.

Only recently, for example, did Dianne Feinstein, a Democratic Senator from California and former mayor of San Francisco, change her opinion to favor legalization. She opposed legalization in California in 2016. Other Democrats, however, have yet to change their minds on legal marijuana, perhaps to avoid being labeled as soft on crime. For example, Senator Catherine Cortez Masto, a Democratic Senator from Nevada, opposed legalization in her state, but she has spoken in favor of her state’s legal marijuana laws rather than support Sessions’s intention of federal enforcement. And on April 20, Senate Democratic Leader Chuck Schumer of New York announced his intention to support federal decriminalization of marijuana.

Even some Republican senators are relaxing their views. Mitch McConnell, a Republican senator from the agricultural state of Kentucky, has proposed legislation to legalize hemp farming. This bill has bipartisan support in the Senate and Congress. Other federal legislators have taken bolder steps. Cory Booker, a Democratic senator from New Jersey, has proposed a bill that unabashedly challenges the war on drugs. As a recent Washington Post article put it, the bill is “aimed at undoing some of the harm the nation’s decades-long war on drugs has inflicted on poor and minority communities.”