University of Vermont Will Teach Class on MMJ 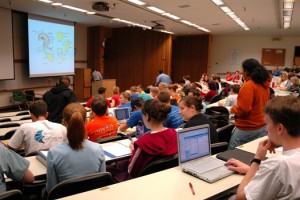 The University of Vermont’s College of Medicine is offering a class in the science behind the cannabis plant. And just in time: professors there say they face a distinct dearth of research on the drug and its medical benefits.

This won’t be the first time academics have focused on marijuana, its biology, and its chemistry. And other medical schools have offered limited coursework on the subject. But the Vermont program may be the first to train medical students exclusively in the medicinal use of cannabis.

“What we’re trying to do with this course is to sort of demystify this whole subject matter, to try to treat this like any other drug, like alcohol or amphetamines or opioids,” said Vermont pharmacology Prof. Wolfgang Dostmann. “Just demystify the whole thing and say what it is, what is going on with it, how does it work.”

Medical marijuana has been legal in Vermont for 11 years, while another 26 states have adopted it over the past 20 years. But cannabis remains illegal under federal statute, and that prohibition makes it harder for academics to study it.

In Vermont, students said they want to learn more about the drug and its therapeutic possibilities. Alice Peng, a graduate student in pharmacology who hopes to attend medical school, said she thinks marijuana could be useful in treating chronic pain.

“I also do work in the cancer center in the hospital, and so I see a lot of cancer patients, and I would be really interested in seeing how it would help their chronic pain,” she said.

The course won’t be easy. Professors complain the lack of in-depth research will make it harder to explore the various medical uses for cannabis.

Topics covered by the course will include the chemistry of cannabinoids, marijuana taxonomy, the drug’s physiological effects, treatment potential, and the ways in which political, historical, and socioeconomic factors impact medical marijuana laws.

Dostmann plans to teach the course along with Lounsbury. He specializes in pharmacokinetics, the study of how drugs work in the human body, while she specializes in how the body responds to marijuana at biological and physiological levels.

Almost 100 graduate students had signed up for the class as of early December, so many that professors had to move to larger classrooms twice. It is scheduled to start in the spring, and it’s open to the public, including lawmakers and police.

The Vermont class will introduce students to the owner of a local medical marijuana dispensary, who will discuss biology. A study of economic concerns surrounding the drug will be led by an associate business professor. Field trips to the state Legislature are also possible.

Dostmann and Lounsbury said they will write a textbook for future classes, since there are few current academic books on the subject. And the titles that do exist are often geared more toward the practicalities of using marijuana, such as how to clean bongs.

Mostly, the teachers said, they want to draw attention to a potentially useful medication and help everyone, including stoners, understand how it works.

“Without having enough clinical trials, we won’t really know whether this is applicable or whether it is a snake oil,” Lounsbury said.