The 3 Legal Levels of Weed

We all know weed is legal in a few places: Washington, Oregon, Alaska, Colorado, and Washington, D.C. – though legalization in the last is still somewhat up in the air.

But what about other states? How do marijuana laws shake out across the United States? What will get you in trouble where? And where should you move if you make living decisions based on your marijuana consumption?

The basic idea is that you’re allowed to buy, possess, and carry a small amount of marijuana, usually an ounce or two at a time. The law in these places has never barred actual use, as that’s a much harder rule to police.

Some offenses are still offenses, such as possession of more than the limit or public consumption. The feds still ban any cannabis on federal land, and that includes a lot of space in the District, so it’s still relatively easy to get charged with a crime there. Driving while high is also a crime everywhere.

Each of the four legal states, the District, and 19 other states allow full medical marijuana. That means patients with certain severe conditions can buy pot at local MMJ dispensaries, often at a price that’s lower than the legal or black markets.

Medical pot was born in California in 1996 and has since spread like wildfire. It’s usually a prerequisite to legalization, as seen in the fact that all four legal states previously had MMJ.

Another dozen states allow a restricted form of medicinal cannabis. Certain patients, usually children with severe epilepsy, are allowed to use a non-intoxicating form of the drug thought to treat seizure disorders.

Decriminalization exists in a strange kind of legal twilight. The drug is still illegal in these 14 states, but the cops won’t arrest you for having it. This applies only to small amounts of weed, usually an ounce or less.

Instead of jail, cops write civil citations, similar to traffic tickets. Stoners who get the tickets must pay a fine, typically no more than a few hundred dollars, sometimes as low as $25.

Like medical pot, decriminalization helps pave the way for eventual legalization. The experience is still a hassle, and not exactly cheap. Plus, it’s much harder to find quality weed on the black market. But it’s definitely better than the alternative. 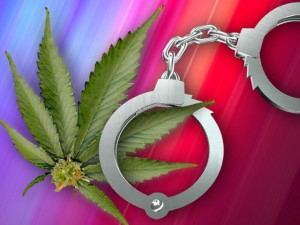 Fully 17 states still treat marijuana possession as a misdemeanor or felony, depending on the weight. Penalties include anything from substantial criminal fines to decades in prison.

Surprisingly, these states aren’t concentrated in any region of the country, though they tend to be very conservative states. Almost all of the Deep South, a few in the Mid-Atlantic region, several in the Upper and Lower Midwest, and the Mountain West.

Every place is different when it comes to marijuana. The stuff is beloved in Rhode Island, for example, but almost unheard of in Utah. Hopefully America will reach a point where every state welcomes potheads, but we have a way to go yet.