Marijuana will soon be legal in Oregon, and cops there are having some fun with users as they prepare for the new law.

Police in Portland, Ore., recently printed a brochure to help cannabis consumers follow the rules. Those rules will allow the possession of up to 8 ounces of marijuana at home and up to 1 ounce in public.

The brochure uses images of a local delicacy, the Voodoo donut, to explain the limits of the law. A chocolate donut with swirls sits next to a pile of cannabis in a series of photos, each with a larger pile.

One image shows a pile containing 1 ounce, roughly the same size as the donut, labeled “Legal on Person.” Another photo shows an 8 ounce pile next to the same donut, this time labeled “Legal in Household.” A final shot shows the donut with an even larger pile, 1 pound, labeled “Illegal.”

Oregon’s law is the most generous in terms of possession limits. Most other states draw the line at 1 ounce, either at home or in public. These laws also typically allow home cultivators to keep everything they grow, however, so the practical effects of Oregon’s rules are much the same.

Cannabis will officially go legal in July, though the first retail stores won’t open until 2016. In the meantime, it will be legal to buy and possess marijuana for both recreation and medicine. It’s also legal to grow up to four plants on private property. It is illegal to sell marijuana, however, since no retail licenses have yet been issued.

Grower limits will be reduced 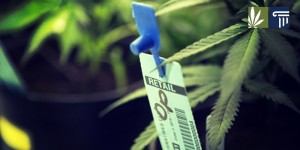 It is also a crime to grow larger amounts of cannabis. As they prepare for recreational legalization, lawmakers in Oregon have discussed capping the total number of medical marijuana plants at any given grow site to discourage massive “caregiver” grows that sometimes divert product to the black market. Lawmakers hope to stop the diversion on both the medical and recreational sides.

Cops in Portland are taking a line from the playbooks of police in Denver and Seattle, who have also used humor to inform marijuana users about the law. In 2013 Seattle police officers handed out 1,000 bags of Doritos, complete with a list of local laws, at a public celebration shortly after legalization took effect there.

The focus, as usual, is on the munchies, typically a source of hilarity. But the message is serious: Now that cannabis is legal, consumers are expected to follow the law in Oregon.

That means no toking in public and no driving while stoned. Public consumption carries a relatively minor civil fine, but stoned driving is a crime in Oregon – a felony, in some cases.