By Eric HowardPublished On: November 5, 2018Categories: Featured, In the Polls, Legalization, US News

Support for legalization continues to grow among Americans, according to a Gallup poll released October 22. Two-thirds are now in favor, the highest number in 50 years.

During the 1970s, 1980s, and early 1990s, support was steady and in the minority at around 25 percent. In the late 1990s, however, the number began to increase, reaching a solid majority of 58 percent in 2015. The late 1990s also saw the success of ballot measures legalizing medical marijuana. For example, five measures won approval in 1998 and three in 2000.

This shift in opinion is not lost on politicians. Numerous office-seekers, including over 20 candidates for governor, have announced their support for legalization. Among these candidates are Ned Lamont of Connecticut, Andrew Gillum of Florida, Stacey Abrams of Georgia, Paulette Jordan of Idaho, and J.B. Pritzker of Illinois, Janet Mills of Maine, and Andrew Cuomo of New York, who changed his mind on the issue after facing a serious challenge from a candidate who made legalization and restorative justice an issue. Democratic candidates in these other states support legalization as well: Maryland, Massachusetts, Michigan, Minnesota, Nevada, New Hampshire, New Mexico, and Ohio. Democratic gubernatorial candidates in other states support medical legalization. 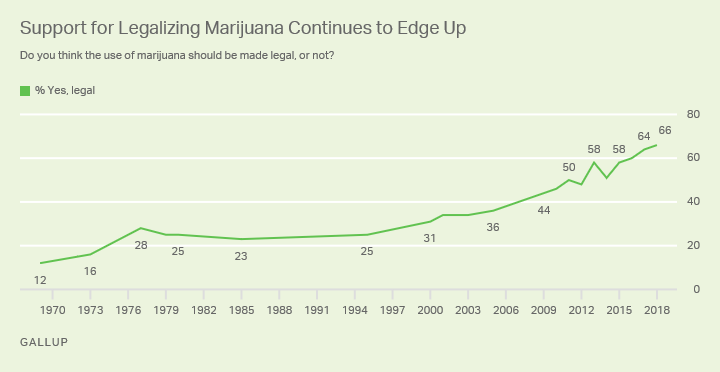 Support for marijuana legalization has reached a new peak. 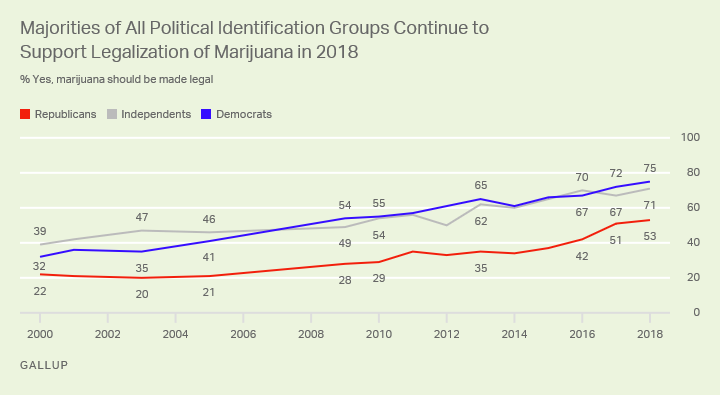 Our time has come

In response to the poll, NORML Political Director Justin Strekal said to Forbes: “It is time for lawmakers to acknowledge the data-driven and political realities of legalization. It is time to stop ceding control of the marijuana market to untaxed criminal enterprises and implement common-sense, evidence-based regulations governing cannabis’ personal use and licensed production by responsible adults. Our time has come.”

Evidence supporting Strekal’s assertion can be found elsewhere besides the Gallup poll’s numbers. Adult use is on the ballot in Michigan and North Dakota, medical in Utah and Missouri, and decriminalization in Ohio and Wisconsin. Available polls on these state measures are favorable.

Writing for Gallup,  Justin McCarthy compares the change in public opinion toward marijuana to gay marriage and interracial marriage before that, saying: “support for marijuana legalization has generally only expanded, even if slowly, over the course of multiple decades–raising the question of where the ceiling in support might be.” Currently, the ceiling seems to be around 80 percent, which is the number for Americans under 34. 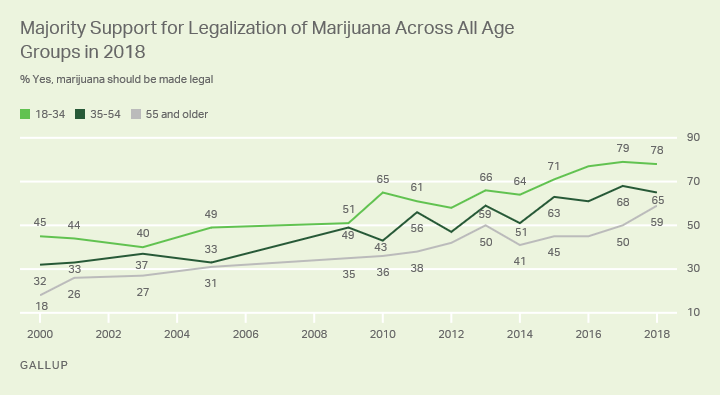 In 1996, support for gay marriage was at 27 percent; now it is at 67 percent, according to Gallup. Only among Republicans is support for gay marriage a minority position. On the issue of interracial marriage, support reached 87 percent in 2013, up from 4 percent in 1958. A poll conducted after the 2016 election, however, provides an indication of how attitudes can shift: 17 percent of those polled said that interracial marriage was “morally wrong.” Nonetheless, at the same time, many more Americans are marrying someone of a different race, with as many as almost 30 percent or as little as about 10 percent marrying outside their ethnic group, depending on the group. This is up from 3 percent decades ago.

After interracial and gay marriage were legalized by courts and people saw that fears of what would result were overblown, support for gay and interracial marriage grew steadily. Similarly, as states have legalized medical marijuana and adult use without causing significant social problems such as increases in crime, use by minors, or workplace accidents, polls have shown increased acceptance of legalization. While resistance and backlash on these issues continues, it seems impossible that public opinion will ever fully return to the numbers of previous years.

What do you think? Will legalization sweep America in 2019? Leave a comment below.