Two police officers beat an unarmed teenager as he tried to surrender during a marijuana arrest in late August. 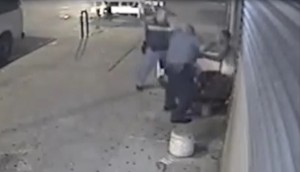 The 16-year-old boy, Kahreem Tribble, was beat by NYPD Officers Tyrane Isaac and David Afanador, according to video posted by the DNAinfo news site. The two cops stopped Tribble on suspicion of possession Aug. 29 after they saw he was carrying a duffle bag. The video provides no other rationale for stopping the boy.

When Isaac tried to stop Tribble, the teen ran a short distance, then turned around to surrender with his hands raised. But Isaac responded by punching him in the face. Afandor then arrived with his gun drawn, pointed at Tribble, and pistol-whipped him.

Isaac punched Tribble a second time while Afandor went to their car. Afandor returned with the canvas bag, which allegedly contained casnnabis. The officer swung the bag into Tribble’s face.

The incident, the latest in a never-ending series of reminders that those with power always abuse it, comes as the NYPD is trying to improve its image and restore relations with minority communities.

The department was long criticized for its use of the so-called “stop and frisk,” a legal quirk that allows police to stop almost anyone on the street and pat them down for weapons.

The city has consistently used the tactic to target African Americans and Latinos. That disparity led the federal courts to order New York officials to cut all but end stop and frisks. City leaders are currently implementing that ruling.

Isaac and Afandor didn’t do the department any favors. The city leads the nation in marijuana prosecutions and prison sentences, even for small-time offenders. This has created the widespread perception that the NYPD is overly aggressive and thoroughly racist.

Tribble, who surrendered peaceably, was charged with possession of 17 bags of weed and disorderly conduct.

The cops quickly hid behind their union representatives, who will almost certainly get them off the hook, probably very quickly. The NYPD has a terrible record when it comes to punishing its own.

“As usual, the video fails to capture the offense that resulted in police action or the lengthy foot pursuit that culminated in the arrest,” said the union rep. “Situations like this one happen in real time under great stress. It’s very easy to be judgmental in the comfort of an office while sitting in front of a video screen.”

Never mind that the video shows Tribble running for less than 10 seconds – not even close to a “lengthy” pursuit.

The two officers are under criminal investigation by the Internal Affairs Bureau and Brooklyn District Attorney Ken Thompson. Isaac was stripped of his badge and gun while Afandor was suspended without pay.