Philadelphia is about to become one of the largest cities in the United States to remove criminal penalties for pot possession. 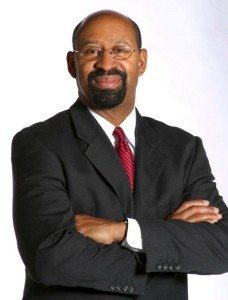 In early September Mayor Michael Nutter agreed to a legislative compromise that will allow the city to decriminalize marijuana. The Philadelphia City Council passed a marijuana decriminalization bill earlier this year. After the council agreed to tweak the law at Nutter’s insistence, the mayor said he would sign it.

Nutter initially opposed the bill and refused to sign it, but changed his mind after council members helped open his eyes to the problems the law is meant to resolve.

“We want to ensure that the punishment for using or possessing small amounts of marijuana is commensurate with the severity of the crime, while giving police officers the tools they need to protect the health and well-being of all Philadelphians,” Nutter said.

The council was scheduled to approve the mayor’s changes in mid-September. Once they do, Nutter has said he will sign it.

If he does, people caught with less than 30 grams of weed (slightly more than an ounce) would be fined $25 instead of serving jail time. Tokers caught lighting up in public would be fined $100 or ordered to perform several hours of community service.

Supporters of the new law say black Philadelphians are arrested for minor marijuana crimes far out of proportion to their population. Both whites and African Americans use cannabis at essentially the same rate.

Of the 4,000-plus arrests in the city for pot possession each year, 83 percent involve black or Latino defendants. These ethnic groups make up less than 60 percent of Philadelphia’s population.

“It follows you,” said City Council Member Jim Kenney, who proposed the bill. “If you’re young, black and trying to find a job in this economy, it’s very difficult. With a criminal arrest, it’s impossible. On top of that, you’re not eligible for college financial aid and you can’t go into the military.”

Philly is the fifth largest city in the United States and the 10th largest in North America. Of the 10 largest cities on the continent, only Mexico City, Philadelphia, and Chicago have removed criminal penalties for marijuana offenses. There are also no criminal penalties for possession in Los Angeles, but only because the state decriminalized weed several years ago.

Local reform has become a new and successful focus of the cannabis movement. Cities from Maine to Michigan are decriminalizing in a growing effort to force reform at the state level.