Marijuana busts have decreased since the Philadelphia City Council voted to decriminalize the drug in June, but police say they won’t stop arresting people for simple pot possession whether or not the law takes effect. 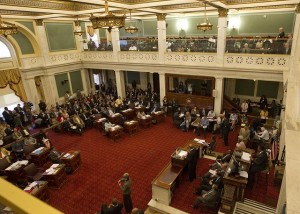 The council voted June 19 to remove criminal penalties for pot possession, replacing them with a small civil fine. The ordinance still needs the signature of Mayor Michael Nutter, who opposes it.

But enough council members supported decriminalization that it’s likely the council would override the mayor’s expected veto. Still, the police chief said he plans to keep arresting people regardless.

Between June and July, police arrested 264 people for pot crimes. Most of those people, 140, were charged only with simple possession, nothing more serious than a few grams of weed for personal use.

Most of the people charged with more than one crime are accused of other drug offenses, including possession of another drug, conspiracy, and manufacture with intent. The remaining arrests included a few gun charges, solicitation, aggravated assault, and littering. All but 64 of the suspects were released without bail.

Arrests for simple possession would be barred under the ordinance. Yet Police Chief Charles Ramsey vowed to ignore the policy if it becomes law.

Pot possession is governed by state and federal law. The drug is banned at the federal level, but many states have approved it for recreational or medical use.

In Pennsylvania, weed remains strictly illegal under state law, though lawmakers could soon approve medical marijuana. Possession of 30 grams of weed or less is punishable by up to 30 days in jail and a $500 fine.

In Philadelphia, pot busts have dropped by 44 percent over the same time period last year. But one thing isn’t clear: whether police are still arresting more black residents than white.

Both races use at roughly the same rate, yet blacks have historically been busted at five times the rate of whites in Philadelphia. Some council members said they were outraged by the continued arrests and the police chief’s stance.

“It’s unconscionable,” said Council Member Jim Kenney. “The issue for me is that we have a 26 percent poverty rate. I need to have everyone working. And for a lot of these people, it is impossible to get jobs, all over a nickel bag of cannabis or a couple of joints.”

Philadelphia is the only part of the state that still jails marijuana suspects, and Kenney said that should change.

“We’re supposed to be progressive,” he said. “But we’re the only county in the entire state that does custodial arrests for marijuana. It’s just wrong.”