Support for medical marijuana has reached the White House.

President Barack Obama said in April that he backs the idea of medicinal cannabis. Obama didn’t go so far as to say he would try to change the law, but he said he would carefully review a proposal currently before the Senate that would pave the way for widespread legalization. 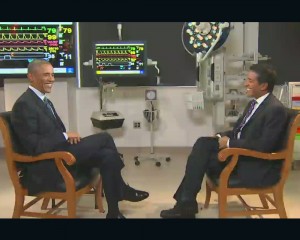 “You know, I think I’d have to take a look at the details,” the president told CNN’s Dr. Sanjay Gupta. “But I’m on record as saying that not only do I think carefully prescribed medical use of marijuana may in fact be appropriate and we should follow the science as opposed to ideology on this issue, but I’m also on record as saying that the more we treat some of these issues related to drug abuse from a public health model and not just from an incarceration model, the better off we’re going to be.”

The interview was part of the third installment of Gupta’s “Weed,” a two-year documentary investigation into the benefits of medical cannabis. The neurosurgeon and medical reporter made waves in 2013 when he publicly switched his position to back legalization.

This isn’t the first time Obama has indicated support for MMJ, but his comments in the past have been decidedly tepid and noncommittal. He has little time left in office, meaning his opinion won’t have much impact on the matter.

Even so, the president could put his weight behind the Senate bill, which would reclassify marijuana under the Controlled Substances Act of 1970. That Nixon-era law categorized every legally controlled substance according to danger, addictive qualities, and medical usefulness.

Cannabis was placed in schedule 1, the most restrictive category, where it currently resides along with heroin, LSD, and ecstasy. That means the feds consider it to be extremely dangerous (it isn’t), extremely addictive (it isn’t), and medically useless (it isn’t).

Advocates have tried for decades to overturn marijuana’s listing under the CSA, unsuccessfully. They came closer than ever this year when a federal judge allowed testimony on the benefits of the drug, but that attempt to reschedule cannabis also failed.

Bill would reclassify cannabis to schedule 2

The Senate bill would turn the tables, removing marijuana and placing it in schedule 2, which includes cocaine, methamphetamine, and PCP. Those drugs are considered to be highly dangerous and highly addictive but, like cannabis, they have medical uses.

Currently, physicians may not prescribe any substance in schedule 1 for any reason. MMJ doctors get around this barrier by issuing informal “recommendations” rather than federally controlled prescriptions.

Rescheduling would allow patients easier access to the drug and would remove the threat of federal intervention. Congress recently enacted a law that tried to do just that, but the Department of Justice has repeatedly refused to obey it.

Obama doesn’t seem to have the political will to force reform on his own administration, let alone to work with Congress toward legalization. Still, his support for medicinal marijuana could make it easier for future leaders to get the job done.