A large wildfire that burned dozens of homes in Northern California last year started with an illegal marijuana grow, authorities said recently. But two people suspected of sparking it had already fled the United States, the authorities said.

As of Aug. 17 the blaze had destroyed at least 43 homes and torched more than 108 square miles in Yola, Calusa, and Lake counties, a region north and east of the Bay Area. In addition to the homes, more than 50 outbuildings burned in the fire.

The fire broke out at the site of another blaze traced to an alleged serial arsonist, authorities said. The two wildfires started at different times but burned overlapping geography, fire officials said. Police arrested a 40-year-old California resident, Damin Anthony Pashlik of Clearlake, Cal., and charged him with 17 counts of arson.

Pashlik was arrested Aug. 15, shortly after starting the so-called Clayton fire, police said. That blaze burned more than 175 homes and businesses in Lower Lake, leaving much of its historic downtown in smouldering ruins. The flames were still barely contained as of Aug. 17.

“Mr. Pashilk committed a horrific crime and we will seek prosecution to the fullest extent of the law,” said Ken Pimlott of the California Department of Forestry and Fire Protection. “My thoughts continue to be with the people of Lake County during this difficult time.”

Last year’s fire, meanwhile, started with a faulty water heater next to a plot of about 100 marijuana plants near Clearlake, said state Department of Forestry and Fire Protection spokeswoman Janet Upton.

“It was strapped to a tree,” Upton said. “Quite inventive, and why it was not very safe.” 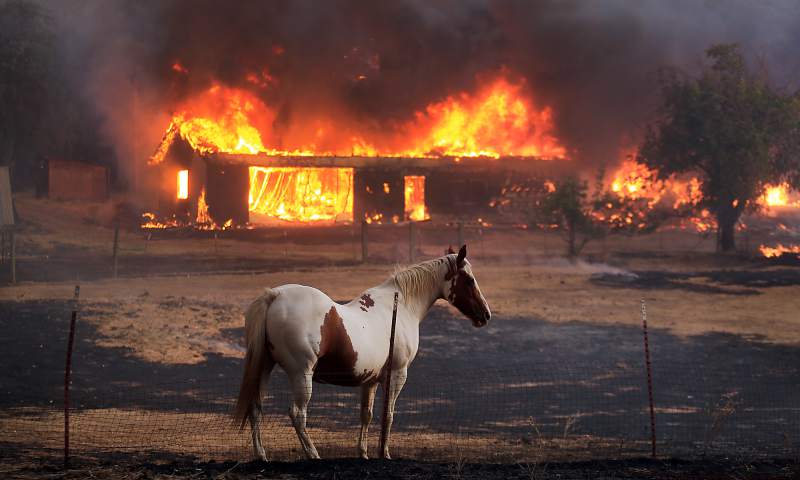 The Golden State is stuck in the longest and driest drought in its history, a fact that makes wildfire season even more dangerous than usual. The 2015 Clayton fire was the second-most damaging of the year in Lake County. A third is still under investigation, but Pashlik is suspected only of starting the Clayton fire.

Almost every part of the state has been swept by wildfires in recent months, though the problem is worse in the desert areas of Southern California. Marijuana fires are more likely to break out in the northern counties, where most California weed is grown – both legally and otherwise. The hills of Mendocino, Humboldt, and Trinity counties are notoriously dense with cannabis farms, and fires are sometimes traced to them.

Authorities in Lake County didn’t disclose whether they know the identities of the two suspects or where they went when they left the United States. But the crime may not be serious enough to force extradition back to California.

What do you think: What consequences should marijuana farmers face when they start wildfires? Leave a comment below.