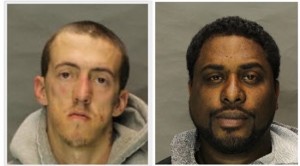 Jared Brandt, 26, and Andrew Allie, 35, both residents of Lebanon, Pa., were arrested in that city in late April and charged with multiple drug crimes, including possession and delivery of synthetic cannabis.

Brandt was arrested by officers with the Lebanon County Drug Task Force April 23. Police said a search of his home uncovered synthetic marijuana (also known as Spice or K2), packaging, and a heat sealer for use with the drug.

Allie was arrested nearby the same day, while allegedly trying to transport more synthetic cannabis to Brandt. Police said Allie was carrying 500 grams of Spice, roughly $5,000 worth, at the time of his arrest.

Allie, meanwhile, was charged with attempted delivery of synthetic marijuana, possession, possession of a designer drug, possession of drug paraphernalia, and criminal use of a communications facility. He was booked on $20,000 bail.

The arrests come as local officials scramble to respond to a growing synthetic marijuana crisis. Dozens of people have been hospitalized in recent weeks in a spate of Spice overdoses. Nearby Allentown has been hit especially hard, with officials there pinning as many as eight deaths on the drug.

Synthetic marijuana can be deadly

Spice is a chemical brew cooked up by research scientists for use in the lab. It escaped and rapidly became a drug alternative for stoners who can’t get real marijuana, especially teens. Spice is sprayed on inactive herbal material and smoked, just like cannabis. It causes many of the same effects, but the difference between the two drugs can be deadly.

Marijuana is proven to be safe as both a recreational drug and as medicine. There has never been a recorded instance of fatal cannabis overdose, anywhere, ever. The same is not true of synthetic marijuana.

Though reliable statistics are hard to come by, Spice has been implicated in several deaths across the country. Only one of those cases has been firmly linked to the drug, but there are also many reports of users hospitalized with severe health problems, including tachycardia and high blood pressure.

Certain chemicals used to create Spice have been banned by Congress and many state legislatures. But there are other ways to make the drug, and chemists are constantly trying to outsmart the government by using different ingredients.

The lure of synthetic cannabis, at least originally, was that it was legal. In some formulations it still is, though it’s becoming much harder to find in most places. Still, the appeal of a semi-legal stand-in for marijuana is too great for some users.

Spice is also harder to detect in drug tests than real cannabis. But the risks greatly outweigh the benefits, as the rash of hospitalizations in Allentown attests. It will be some time before health officials make sense of the epidemic, but the damage is already evident.

The best solution for the problem of synthetic marijuana is brutally simple: Legalize the real thing. Given the choice between kids Bogarting a joint after fifth period or huffing toxic chemicals distributed by unethical scientists, the right move should be obvious.