Maryland Woman Finds a Surprise in Her Fast Food: Pot

When a Maryland woman stopped by a local Sonic restaurant, she got what many would consider an extra treat. She doesn’t see it that way.

Carla McFarland, 35, ordered three meals from a Sonic in Frederick, Md., in late June, one for herself and one each for her two children. When she opened the food in her car, she spotted a small plastic bag of weed tucked among a side of fries. 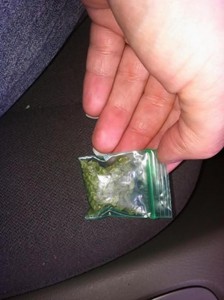 “I just kind of sat there in my car in shock,” McFarland said. “I kept thinking, what if my kids had eaten it?”

She saw the weed after passing food to her 8-year-old son and 6-year-old daughter. McFarland said she went back into the store to complain and called police. The manager also called police, she said.

The manager explained to McFarland that an employee was carrying pot in her apron and a small baggie (likely a dub) fell into McFarland’s bag. The manager told her the worker had been fired, McFarland said.

John Louderback, who operates the franchise location where McFarland found the weed, told a local newspaper the incident was under investigation. He confirmed that the employee was fired. But Louderback declined to comment on the store’s drug testing policies.

McFarland and her children got new meals from the restaurant and what she described as a sincere apology from Louderback.

“I definitely can’t say that they didn’t go out of their way,” McFarland said. “I honestly think they were more in shock than I was.”

Police in Frederick County said they were investigating but hadn’t arrested anyone. The contents of the plastic bag tested positive for marijuana, the county sheriff’s department said.

McFarland wrote about her marijuana discovery on Facebook. Some friends found it amusing, while others urged her to take the incident public.

McFarland and her children were in relatively little immediate danger. For one thing, the pot was sealed in a plastic bag. For another, eating raw marijuana usually has the same effect as eating a handful of mulch. THC is only effectively absorbed by the digestive system when it’s cooked into fatty foods such as butter. 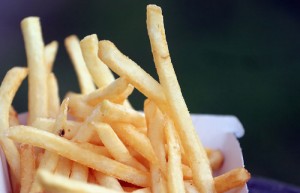 Eaten raw, the drug has little effect. Of course, it might hit a child harder than an adult, but it’s unlikely to get anyone high. Still, McFarland wasn’t laughing about what happened.

The Sonic incident comes a month and a half after an Iowa couple discovered weed sprinkled amidst their McDonald’s McDoubles. The woman was pregnant, and they were eating with their 2-year-old son at the time.

The couple were given a drug test and could pursue a lawsuit against McDonald’s.