Two recent studies support ordinary intuition about behavioral economics and the marijuana market. The studies found that people prefer to buy their marijuana legally, and will pay a higher price for legal product—up to a point. Another finding: creating a legal market does not expand the illegal one.

Study #1: How do consumers act with different pricing circumstances?

The first study, which is published in the scientific journal Addiction, surveyed adult cannabis users in the United States in legal states. The authors asked what those users would do with their money according to different sets of pricing circumstances. The study sought to address one concern of opponents of legalization head on: that making marijuana legal would open the floodgates on the illegal market as well, which could result in more marijuana use among minors, for example. To test this idea, the authors of the study asked those surveyed whether they would buy legally or illegally, depending on prices per gram in both markets. 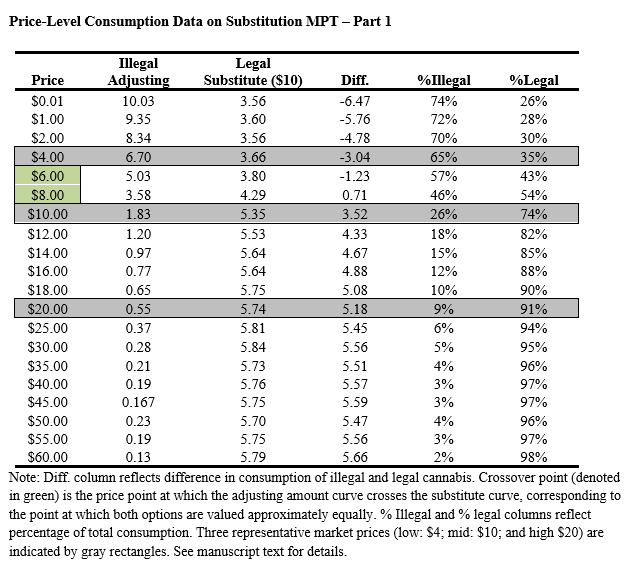 Cannabis users treat legal cannabis as a superior commodity compared with illegal cannabis and exhibit asymmetric substitutability favoring legal product. Cannabis price policies that include somewhat higher consumer costs for legal cannabis relative to contraband (but not excessively higher costs) would not be expected to incentivize and expand the illegal market.

Tolerance for high legal prices was fairly high. Using a baseline price of roughly $10 a gram, those surveyed began to abandon the legal market when its price was roughly $6 to $8 higher. The optimal legal price was in the neighborhood of $8 to $10 per gram. When prices in both markets rose, however, loyalty to the legal market did as well.

Study #2: Does a legal market suppress an illegal one?

The study is supported by another, similar study conducted in Canada. The authors of that study also sought to test the idea of whether a legal market will suppress an illegal one. The results support this idea. The authors surveyed adult cannabis users in Ontario and found that while the legal market should not be expected to entirely eliminate the illegal one, users will strongly prefer a legal market even if its prices are higher. The survey found that people will switch markets, or substitute one for the other, only when the price difference is significant, and that even then, the legal market is preferred.

In short, the legal market significantly reduces the illegal one. The authors did find, however, that if the legal price gets too far above the illegal one, buyers will turn to the illegal market. The authors state that their evidence support the conclusion that “cannabis users consider legalized cannabis to be a superior commodity relative to illegal options” and that “the presence of legal cannabis substantially decreased demand for illegal cannabis.” The authors recommend that “Pricing policy will need to be optimized to maximize the benefits of a legally regulated cannabis marketplace.”

While the workings of subatomic physics may not always appeal to common understanding, the workings of the market often do, and these two surveys offer evidence that what happened after alcohol prohibition ended in the United States was not a fluke: the illegal market for booze dried up almost completely.

What do you think? How are the illegal markets in legal states doing? Will regulations drive legal prices too high? Leave a comment below.