Medical marijuana supplies are running low in Italy, so the country’s government has turned to an unusual source: the army.

The Italian army will start growing medical weed in a high-security military lab in Florence, the government said. Officials say the plan will provide affordable, legal, and safe marijuana to patients.

Medical cannabis is very expensive in Italy, with patients paying as much as 10 times more for legal cannabis than they pay for the same product on the street. The government hopes the military growing experiment will make weed available to all patients who need it.

Right now most of the country’s legal supply of marijuana is imported from Holland. That alone drives up the price. So do multiple layers of government bureaucracy.

Patients routinely pay an exorbitant $48 a gram. The same amount of weed would cost about $6 on the street. In the U.S., a gram sells for about $10 to $15 on the black market. In Colorado, where weed is legal, a gram costs about $11.

Qualified Italian patients will pay much less for pot or even get it free, officials said. That should help countless patients who are too poor to afford cannabis, whether on the street or from government-licensed pharmacies.

The new army program could make life much easier for struggling patients. But the Catholic Church remains strong in the country, and cultural stigmas associated with drug use may cut down on the number of patients who turn to weed.

Agricultural scientist Gianpaolo Grassi is already growing marijuana on his 173-acre laboratory garden. It’s the only place in Italy where cannabis containing more than 0.2 percent THC can be grown legally.

A 10-foot barbed wire fence surrounds the lab, with video cameras posted along the perimeters. Before the fence was added, thieves would cut through the walls of Grassi’s greenhouse and steal pot. “All kids,” Grassi said.

Italy has long allowed hemp production for industrial uses, and Italians have been cultivating the plant for hundreds of years. 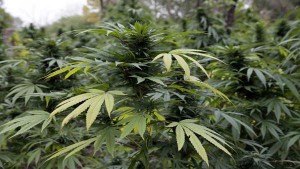 Officials haven’t worked out all the details of the army program. It’s considered a pilot program, at least for the time being. Authorities will decide later who will qualify.

Italy doesn’t seem poised to go any further than medical marijuana, though. Recreational legalization is a long way off, and conservative politicians across the country are opposed to reform.

Sen. Carlo Giovanardi, a staunch Catholic and marijuana opponent, said he wants to be sure “curing sick people does not become an excuse to expand the use of the substance.” Legalizing pot, he said, would lead to “a society of zombies.”