A poll of Indiana voters shows overwhelming support for medical marijuana, but in October in the statehouse, a legislative committee appointed to study the issue was unable to reach consensus on what it should recommend, even on the issue of further study.

A television news station, WTHR, commissioned the poll with Howey Politics Indiana. It shows support for legalization of medical marijuana at around 70 percent with most demographics (e.g., men and women, young and old, minority and white). Among Republicans, 59 percent supported legalization, and among women 65 and older, support was at 57 percent. Among Democrats and people 34 and younger, support was higher than 75 percent. The state’s assembly and senate have Republican majorities, and a Republican is governor.

One Republican, Rep. Jim Lucas, filed a medical marijuana legalization bill last year and plans to continue to work toward legalization, saying to Indy Star, “I’m going to make it my mission.” He also acknowledged he went to Colorado to try marijuana and got a good night’s sleep as a result. “It’s immoral that the state still has this criminalized,” he told Indianapolis Monthly. “Lives are being destroyed by the opioid crisis. It’s gotten to the point where it’s forcing us to look at the War on Drugs in a bigger context.” Lucas’s views are opposed by his party leadership. The leader of the Senate, David Long, and House Speaker Brian Bosma both have expressed opposition to legalization and have blocked attempts to pass reform laws. 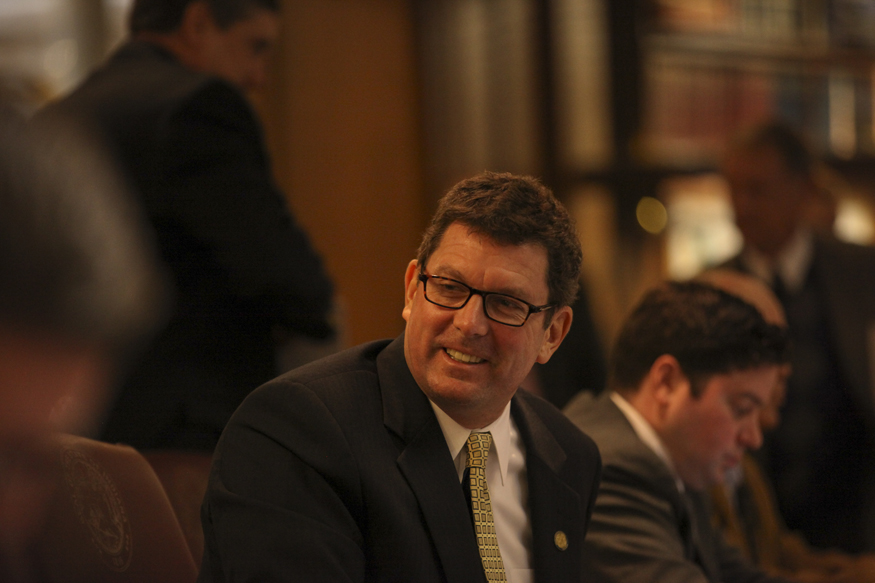 Rep Jim Lucas has ‘made it his mission’ to legalize medical marijuana use in the state.

Medical legalization has the support of Hoosier Veterans for Medical Cannabis, however. Jeffery P. Staker, the group’s founder, argues for legalization as a means to address the state’s opioid crisis, which has been especially devastating to veterans. He says:

Within the US one person every 20 minutes dies of either an accidental and or intentional overdose to prescription pain medication. Doing the math that’s three every hour, 72 a day and so forth. It has been reported that our Veterans are overdosing at twice the rate of civilians….in other words two of the three casualties within the above hour time frame are veterans. This shouldn’t be, nor does it have to, especially within our great state of Indiana.

According to a group of prosecutors, however, medical “Marijuana use increases the risk of opioid abuse and other controlled substances.” Various studies conclude the opposite. The group also claims that workplace accidents and impaired driving increase with legalization. In fact, studies have shown that workplace accidents have decreased in legal states. As for impaired driving, the results of studies are mixed. While fatalities have not increased, those involved in fatal crashes often have marijuana in their system.

Indiana’s civil forfeiture law, which allows police and prosecutors to seize property of those convicted of drug offenses, is about to be reviewed by the U.S. Supreme Court. Tyson Timbs, who was convicted of a drug crime for which the maximum fine is $10,000, sued after his vehicle, worth four times that much, was confiscated.

Indiana has fully legalized CBD oil, but some lawmakers remain opposed to legalizing medical marijuana, claiming that doing so would be a step toward legal adult use. The slippery slope theory has also been used by Aaron Negangard, a prosecutor, who argued against legalizing CBD because it would lead to additional legalization. Indiana approved sale of alcohol on Sunday this year.

While election forecasting indicates that the Democrats may win control of the assembly, it appears that for now, Republican leadership in Indiana remains opposed to additional legalization, which makes it unlikely that Indiana will become a legal state anytime soon.

What do you think? Does legalization have a chance in Indiana? Leave a comment below.