Florida Men Could Get Life Sentence for Weed 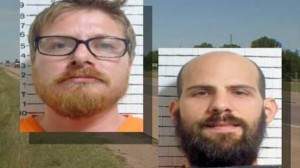 Robert Shepard and Andrew Mason were stopped in early July for tailgating while driving through Oklahoma. This is one of several common bogus allegations police use when they have no legal cause to pull over motorists.

The officers said the men were acting nervous – again, a common, un-provable allegation that police use to justify illegal searches. The cops brought in a drug-sniffing dog, which discovered 50 pounds of hash, oils, edibles, and other marijuana concentrates.

Police estimated the street value of the drugs at $250,000, but that’s likely an exaggeration, since weed costs much less in Colorado, where the men bought the pot.

Oklahoma has some of the toughest anti-weed laws on the books. Simple possession is a misdemeanor punishable by up to a year in jail and a $1,000 fine. But if the charge is transporting with intent to sell, the penalties increase to at least two years in prison – and a possible maximum sentence of life.

The find included candies infused with THC. Based on that information alone, police claimed the drugs were intended for children. Marijuana candies are common throughout Colorado, where they’re legal but tightly regulated.

“It shows who these people are marketing this to, because you don’t put gummy bears out here and target 55-year-old men with this stuff,” said Mark Woodward, spokesman for the Oklahoma Bureau of Narcotics. “Teenagers are going to love this stuff. They’re going to flock to some of these products because they could literally be eating these in class, in school, on the school bus, in a movie theater, at home, and parents would have no clue.” 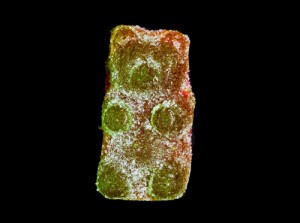 In other words, as Maude Flanders used to say on The Simpsons, “For the love of God, won’t somebody think of the children?” In fact, THC candy is widespread and in most cases is intended only for adults. There have been few if any stories of children eating these candies at school, though a small number of kids have overdosed on weed after mistakenly eating edibles in Colorado.

That state legalized pot in 2012. The first legal pot shops opened Jan. 1 to booming business, and the state has brought in millions of dollars in tax revenue.

A man in Texas, caught with pot brownies and hash oil, faces a similar sentence in Texas. Jacob Lavoro, 19, has been charged with making hash using honey oil, a highly concentrated resin produced by the marijuana plant. That substance is treated much more harshly under Texas law than regular cannabis.