Police in Denver raided a private cannabis club in late June, raising questions about the legality of marijuana use outside the home.

Cops served a warrant on Maryjane’s Social Club June 28, handcuffing tokers, ticketing the owner, and seizing paraphernalia. The club, just one of dozens of social organizations that allow members to light up inside, closed after the raid.

The clubs operate in a legal gray area, but police insist they’re illegal. During the raid, one officer told members the law only allows them to smoke up in their own homes.

At best, that’s a misinterpretation of the law. The state’s legal weed law, adopted by voters two years ago, bans public toking. Users can smoke in their backyards, in their homes, and on any other private property.

The club’s owner says it’s a private establishment, not subject to the public ban. The club doesn’t sell or supply marijuana, nor does it provide food or beverages. Only private members are allowed.

The raid was the first time police in Denver have gone after one of these clubs. The cops who carried it out had apparently tried to join the club covertly before the bust.

Police insisted the social club is a public space. One officer told members they couldn’t smoke cannabis anywhere outside of their homes.

“I asked, ‘Where is it safe?’” said Kandice Moss, a member who was at the club when it was raided. “He said, ‘You’re legal to possess it and smoke it at home, and that’s it.”

The raid was a clear act of hypocrisy by the city. Denver officials recently cleared the Colorado Symphony Orchestra to host three private concerts where audience members can smoke weed during intermission.

The orchestra was initially barred from holding the events because the city considered them public. But once orchestra officials changed their plans, saying the concerts would be invitation-only, the city agreed to let them play.

“This is an identical situation,” said attorney Rob Corry, who represents one of the members busted in the raid. “It’s not even close to being a gray area.”

Corry’s client, Andrew Overall, was cited for smoking hash oil. Police also seized his bong. Overall said he joined the club in June and recently bought a one-month pass. He said he plans to fight his $135 ticket in court. 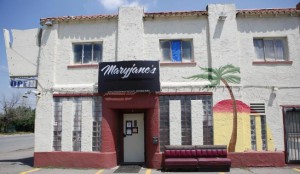 Police also ticketed the club’s owner. Overall said Maryjane’s was a safe, social place for tokers to hang out.

“It’s a place where people who are like-minded can get together and enjoy cannabis,” he said. “I feel safe there.”

Officials in a few other places allow the clubs. The town of Nederland, for example, approved a business called Club Ned to operate for a six-month trial period. Clubs in other places are anxiously watching the situation in Denver, but Corry predicted things would get better, not worse.