By Matt BrooksPublished On: May 1, 2016Categories: Business, District of Columbia, Featured, Legalization, US News

Marijuana tokers in Washington, D.C., got some bad news in April, as District officials moved to permanently ban any use of the drug in public – including at members-only cannabis clubs.

The vote by the District Council on April 5 was a complete turnaround from council members’ previous stance on the issue, though it won’t be decided for good until a final vote in a matter of weeks.

The council vote was 7-6, a disappointing outcome for marijuana users and drug-policy reformers in the nation’s capital. It was a direct reversal of earlier votes in favor of cannabis clubs.

One of those votes, in February, created a task force to study whether the Distruct should start licensing members-only clubs. These pot bars, which have been discussed in other places where marijuana is legal for recreation, would allow only private members and would require them to bring their own supply; cannabis or alcohol sales would be prohibited.

The February vote was unanimous, suggesting to many that the council would ultimately allow the clubs, and possibly other forms of public marijuana use. It is currently a misdemeanor to toke in public, while carrying or using the drug on federal property comes with particularly harsh penalties.

District voters legalized all adult cannabis possession and use in November 2014, and the policy took effect in 2015. It is now legal to possess small amounts of the drug and use it on private property. But retail pot shops remain illegal in the city under federal law.

Cannabis is also legal for recreational use in Colorado, Washington, Oregon, and Alaska. Commercial sales are allowed in those places, but as of yet, cannabis clubs are not.

Increasing public marijuana use since legalization 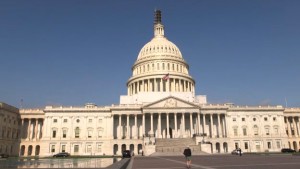 Public use of the drug has increased in the District since legalization took effect and marijuana arrests plummeted across the city. But as in other places, the ban on smoking in public has created problems for many users.

Landlords and other property managers often ban smoking even in private settings such as apartments. This leaves tokers, especially tourists, with nowhere to use. Many smoke in their cars, while driving, which is illegal.

District officials didn’t explain the rationale behind the new vote after it was cast.

Another earlier vote would have let the public smoking ban expire, but council members later reversed course under pressure from District Mayor Muriel Bowser. The April vote marked the second turnaround for the council on the marijuana issue.

Reform advocates complained that the task force was never allowed to do its job. Kate Bell, legislative analyst for the Marijuana Policy Project, said the most recent decision defies the will of District residents.

“We are very disappointed that the council voted to permanently impose this unnecessary ban on the freedoms that the vast majority of the voters support,” Bell said.