The CSA: How Does It Work?

With marijuana reform finally making its way through the halls of Congress, talk has turned in recent days to the Controlled Substances Act of 1970.

This is the law that the federal government has long used as justification for the persecution of American marijuana users. It’s a masterwork of dumb legislation that seems to have only one beneficiary: the liquor industry.

So just what is the CSA? How does it work? And why is it so critical that we change it?

First, a bit of background: The CSA replaced an earlier law, the Marihuana Tax Stamp Act of 1937. The U.S. Supreme Court overturned that law in 1960, leaving the federal government with no ban on marijuana. 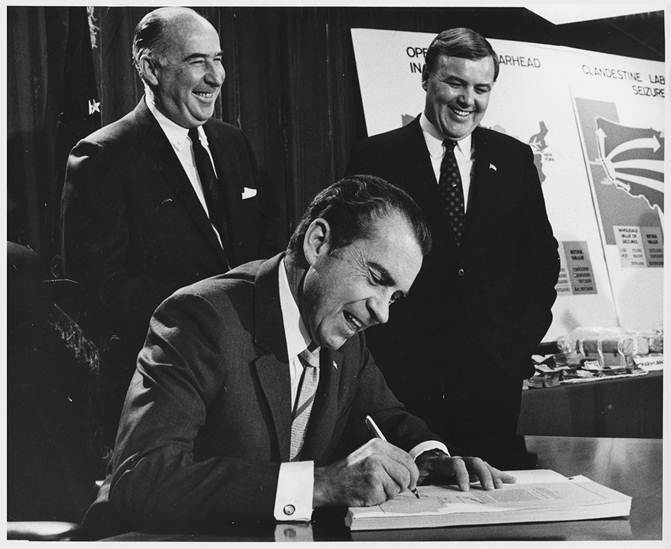 But the feds promptly enacted a new, even more draconian law, the CSA. What’s more, they used this new bill – passed by Congress and signed by President Richard Nixon – as a means to control all recreational drugs.

Categorized on dangerousness, addictiveness and medical use

The law divided these drugs into five categories, or schedules. Substances are added to these schedules based on how dangerous and addictive the government thinks they are and whether they have acknowledged medical uses.

The first category, schedule 1, includes the drugs the DEA considers to be especially dangerous, especially addictive, and medically useless. This list includes ecstasy, heroin, and other incredibly powerful synthetic opiates.

It also includes marijuana, and therein lies the problem. A bounty of scientific evidence demonstrates that cannabis is neither particularly dangerous nor addictive and has many effective medical applications.

Even so, the DEA, Congress, and several presidents refused to reconsider this listing for many years. Until this year, it seemed unlikely this would be changed anytime soon. But now lawmakers are considering a marijuana reform bill that would do just that.

Legislation would move marijuana to schedule 2

The legislation, currently under review in the U.S. Senate, would reclassify marijuana, moving it from schedule 1 to schedule 2. Drugs in this category are considered highly dangerous and addictive by the feds but have acknowledged medical uses.

Schedule 2 includes cocaine, which can be used as an ocular anesthetic; methamphetamine, which can treat ADHD and severe obesity; and PCP, which has limited veterinary uses. Arguably, this classification is still too restrictive to match what we know about cannabis, but it’s certainly better than schedule 1.

Indeed, a change in schedules would make it much less risky for states to allow medical cannabis under their own laws, since schedule 2 drugs are permitted for restricted medical use. It wouldn’t give states the power to legalize the drug completely, but it would remove federal law enforcement from MMJ.

The bill may not pass on its first try. But observers see it as an indication that Congress is rapidly moving toward a pro-reform position. That could soon mean an end to the long but ridiculous placement of marijuana in schedule 1 – though not, sadly, the end of the CSA.