Corn on the cob, frozen bananas on sticks, butter sculptures – all delicacies found at your local county fair. But one thing will be missing from that list when the next Denver County Fair rolls into town later this summer: weed. 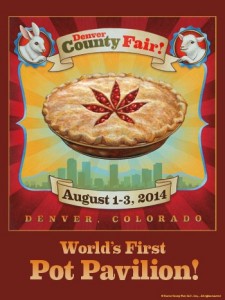 Organizers behind the event announced in June that they have canceled the Pot Pavilion attraction, which first appeared at the 2014 fair. The controversial booth became the subject of a lawsuit filed by fair attendees who complained vendors were illegally handing out cannabis edibles.

The suit was recently settled out of court, but fair organizer Dana Cain said it was time to retire the attraction anyway. The decision came about not because of the controversy, she said, but because interest in the pavilion is low.

Many new cannabis events in Denver

Denver already has a glut of marijuana expos and events, Cain said. The Pot Pavilion simply wasn’t a popular attraction – though the controversy certainly didn’t help.

“In the first year, we got tons of vendor support, waves of international attention, tons of sponsor support, and everybody was all about it,” she said. “But fast-forward a year later, and it’s completely old hat. There’s a complete overload of marijuana events in this town right now.”

Marijuana is legal for recreational use in Colorado. The Pot Pavilion was an attempt to update the stodgy county fair and give it a younger edge. The booth featured joint-rolling contests, a pot-baking competition, and paraphernalia displays, among other highlights.

Public consumption is a misdemeaner 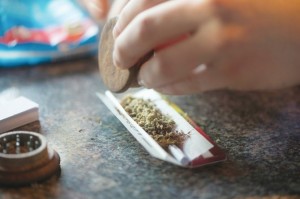 Even though possession of cannabis is legal, public consumption of the drug remains a misdemeanor in Colorado. The Denver County Fair is considered a public event, so organizers were forced to prohibit any consumption at the booth.

Instead, the contests were held at an off-site facility licensed to allow marijuana use. This limited the appeal of the pavilion, Cain said, though some fairgoers complained in the lawsuit that they were given edibles despite the prohibition.

Cain said she and her fellow organizers simply concluded that pot isn’t a good fit for the fair. They never intended to break into the cannabis business, she said.

“We never wanted to be the Cannabis Cup,” Cain said. “We’re the Denver County Fair, so we’re celebrating everything that’s unique about Denver, and last year that was definitely marijuana. We just didn’t want to overdose on marijuana.”

Colorado, like California, is already home to countless weed events, including the annual High Times Cannabis Cup competition. Pot expos were already common before Colorado voters legalized recreational sale and use of the drug in 2012.

Cain said organizers plan to replace the Pot Pavilion with a cultural exhibit about cats. It’s already drawing widespread attention, she said, and should be a better fit for the families and children who attend the fair.

“We couldn’t follow up that amazing pavilion with something substandard,” she said.