A stop at a local Indiana Walmart went south in February when police found a large shipment of marijuana in a truck parked outside the store. 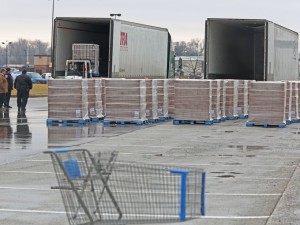 Police in Fishers, Ind., said they seized 500 pounds of cannabis from the tractor trailer outside a Walmart Supercenter. The raid went down Feb. 2 early in the morning.

Police said they approached the cabin of the truck because they thought someone had robbed the driver while he slept. They then found two men sitting in the semi-tractor who said they were waiting to “make a delivery.”

One of the responding officers climbed into the back of the trailer after noticing the cargo door was damaged. Inside, he found 25 pallets of coffee creamer and several large boxes that appeared to be damaged, recently opened, and poorly sealed.

Officers brought in drug-sniffing dogs, who allegedly alerted to drugs in the trailer. Police searched it and allegedly found the marijuana.

Both of the occupants of the truck were arrested at about 4 a.m., police said. The driver, 25-year-old Isaac Roberto Aristiga Bojorquez of Mexico faces charges of possession of cannabis with intent to deliver more than 10 pounds of it. He was held at the Hamilton County Jail on a $70,000 bond.

Sgt. Tom Weger, spokesman for the Fishers Police Department, said the creamer was delivered to its destination by another truck. Weger said the arrest was the latest in a string of major drug seizures in Fishers. The Walmart case marks the biggest pot bust in the city’s history, Weger said.

The technique allegedly used by the driver is not new: Drug runners frequently ship their product in trucks, disguised with other, legal items.

Last month border agents in Texas stopped a shipment of large carrots after discovering the vegetables were merely orange tape cleverly wrapped around packages of cannabis.

Numerous Mexican smugglers have been arrested in recent months after trying to drive large amounts of marijuana across the border. One shipment disguised the weed as watermelons and other produce; another as packages of avocados.

Marijuana laws are severe in Indiana. Possession of more than 10 pounds with intent to distribute it is a felony punishable by at least two years in prison, as many as eight, and up to $10,000 in fines.

Fishers police released few details about the cannabis, including its estimated street value and where it came from. But the suspect’s Mexican nationality suggests it may be “brick” marijuana from that country.

It was also unclear why the two men stopped at Walmart. The creamer shipment was destined for another location, and the men apparently weren’t delivering anything to the supercenter.