Dabbers, hash lovers, and other fans of concentrated marijuana just scored a major victory north of the border. 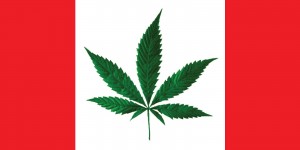 The Canadian Supreme Court ruled unanimously in June that all forms of cannabis – including edibles, hash oil, CBD oil, vape liquids, and other varieties, are legal for medical marijuana patients. Previously Canadian law required patients to smoke the drug.

The ruling has no immediate effect outside Canada, but it could open the door to a large market down the road. One Canadian firm, Nutritional High, is testing a line of cannabis candies and sodas for eventual sale on the American market. The court’s decision should make that an easier task.

Medical marijuana has been legal in Canada since 2000, when the nation’s high court ruled that patients have a constitutional right to their medication. MMJ isn’t explicitly sanctioned by statute, but the country’s Parliament has been forced to implement the program by court decree.

Full reform could be on the horizon

The Conservative-led government is still opposed to medical cannabis and to any form of full legalization. But popular support for reform is strong, and Canada sits on a short list of nations most likely to legalize in coming years.

Marijuana extracts, which are typically dabbed, vaped, or cooked into food, provide a more effective means of delivering THC and CBD. They sometimes get users higher than they would be with dried bud, but medical benefits can also be enhanced.

Oils, edibles, and other concentrated forms of the drug are allowed in every American state where cannabis is legal for recreational use. The legality of these substances varies in states that allow only medical marijuana. And a handful of states impose massive penalties, including life in prison, for offenses involving concentrates.

In reality, concentrates are no different to other kinds of cannabis. They’re significantly more potent, but they’re also typically consumed in much smaller quantities, meaning users end up only slightly more intoxicated than usual.

Overdoses are possible but rare, and the worst reported symptoms are severe but transient panic attacks. Still, some places continue to treat marijuana concentrates the same as crack cocaine.

The Canadian Supreme Court ruled that it would be unconstitutional to bar legitimate patients from using concentrates, noting that “inhaling marihuana (smoke) can present health risks and that it is less effective for some conditions than administration of cannabis derivatives.” Limiting their medication to one form “unjustifiably violates the guarantee of life, liberty and security of the person,” the court wrote.

David Posner, CEO of Nutritional High, called the decision a landmark for patients and consumers in and outside of Canada.

“This is monumental,” Posner said. “Another market the size of California just opened up for our products.”