By Eric HowardPublished On: October 30, 2018Categories: Adult Use, Featured, Legalization

On October 16, Canada became the second country to fully legalize marijuana. Uruguay was the first.

After distributing hemp seeds freely to farmers at the beginning of the 20th century, Canada made marijuana illegal in 1923. Marijuana became popular in the 1960s, however, and soon after lobbying began to decriminalize and legalize, with that goal being reached after almost 100 years of prohibition.

Few countries have reacted publicly. South Korea issued a statement on Twitter via its embassy in Ottawa that the New York Times translated as: “Even if South Koreans are in a region where marijuana is legal, it will be illegal for them to consume it. Please take care not to commit an illegal act and be punished.” Russia also issued a tweet in French calling Canada’s ending of prohibition “hypocritical” and a contravention of international law. According to reports, Russia fears that legalization in Canada will result in increased trafficking of marijuana in Russia.

While the government of Russia has been criticized in recent years for killing journalists and critics within and outside its borders, it is correct that Canada’s ending of prohibition is in violation of treaties the country has signed. The International Narcotics Control Board of the United Nations issued a statement saying: “The legalisation by Canada of cannabis for non-medical purposes is incompatible with the legal obligations incumbent on [signatories] under the international drug control framework and is a violation of fundamental provisions of the 1961 Single Convention on Narcotic Drugs.” The statement goes on to say that the board will “examine the matter” further at its next session. 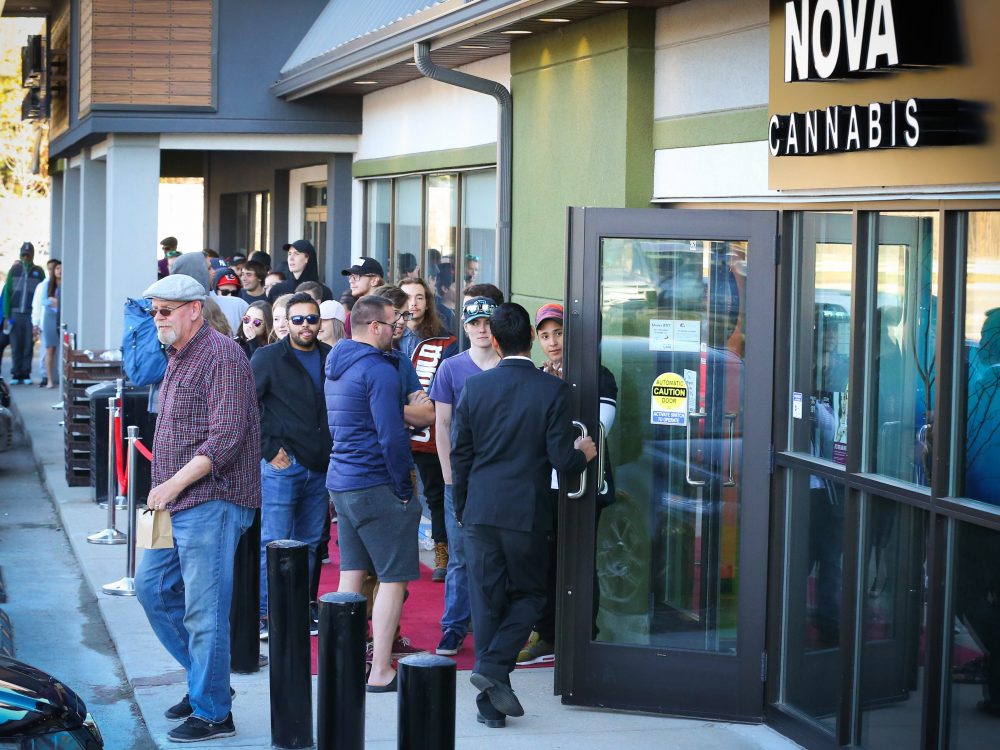 Queues seen outside Nova Cannabis in Calgary on Friday, October 19, 2018.

In September, in anticipation of legalization in Canada, U.S. Customs and Border Protection issued a statement saying that crossing the border with marijuana would remain illegal and that:

On the other hand, there are less official statements indicating that other countries may soon follow Canada’s example. In the United Kingdom, Norman Lamb, a Liberal Democrat member of Parliament, tweeted: “Canada shows the way. When will the UK end the catastrophic prohibition of cannabis?”

A Mexican politician issued a similar statement. Marcelo Ebrard, who is slated to become Mexico’s foreign minister in December, said that his country could follow the “model” of Canada or Uruguay. “We believe [legalization] is an interesting option for the near term,” he said, adding that legalization in Mexico could reduce the violence generated by the war on drugs, which “isn’t working.” Another member of the incoming liberal government has also expressed a willingness to advocate for legal reform, which may include legalization.

Along with Mexico, other countries appear to be considering ending prohibition. New Zealand is in the process of legalizing medical marijuana and may hold a national referendum on adult use in 2020. The Netherlands may also legalize rather than continue to tolerate illegal cannabis sales. In South Africa, a recent ruling of its supreme court has opened serious debate about legalization. The end of prohibition in Canada has also renewed calls for legalization in Italy and the United States.

What do you think? Will Mexico’s incoming liberal government legalize next year? What other countries may follow Canada’s lead? Leave a comment below.