Alaska collected more than $11 million in marijuana tax revenue in the fiscal year that ended in June 2018, an amount that exceeded the previous year’s receipts by about $2 million. Alaska legalized medical marijuana in 1998 and adult use in 2014, with implementation beginning in 2015. Since then, the legal market’s growth has been steady.

According to the state’s Department of Revenue (DOR), “The marijuana tax is imposed when marijuana is sold or transferred from a marijuana cultivation facility to a retail marijuana store or marijuana product manufacturing facility. The tax is $50 per ounce of marijuana.” Currently, the DOR is considering a change to the tax law to allow for a lower rate for bud that cannot be sold at retail, for example because it tests positive for mold. Trim and other parts of the plant are taxed at $15 an ounce.

Where the Revenue Goes

This money goes into the state’s general fund, but half is earmarked for particular programs. One is a substance abuse treatment program for prisoners; a second benefits community residential centers; a third goes to grants for behavioral health and recovery; and a fourth goes to reduction of domestic violence and sexual assault. 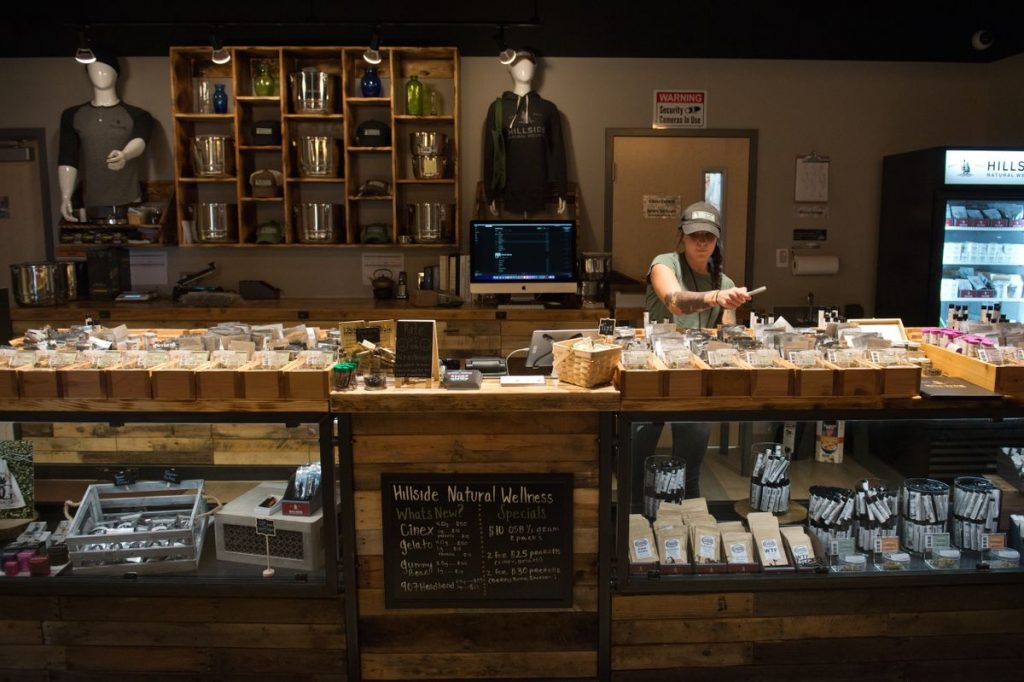 A store manager working behind a counter at a marijuana dispensary in Anchorage.

In addition to taxes, Alaska obtains revenue from licensing. According to a report on the state’s marijuana industry, for a retail store, there is an initial fee of $1,000 and an annual fee of $5,000. The same fees apply to cultivation facilities of more than 500 square feet and to product-manufacturing facilities. A testing facility pays $1,000 initially but only $1,000 to renew. A handler pays $50 every three years. Half of this money goes to the Marijuana Control Board to cover administrative expenses. The rest goes to local governments to offset their marijuana regulation expenses. The first cultivation license was granted in 2016, with four more following that year. In 2017, the “big jump” came, when 168 licenses were approved. Nine more licenses “were granted in the first two months of 2018,” and “445 more” are in process.

The report also offers information on the jobs that the new industry is generating:

According to a study by the conservative Cato Institute, “state marijuana legalizations have had minimal effect on marijuana use and related outcomes.” In other words, as the market changed from illegal to legal, there has been little change in use or related crime, and none of dire outcomes as predicted by opponents. Since legalization in Alaska, tax revenue and legal employment has increased, and little else has changed.

What do you think? How much will Alaska’s market grow? Will other states soon follow the lead of the western states? Leave a comment below.